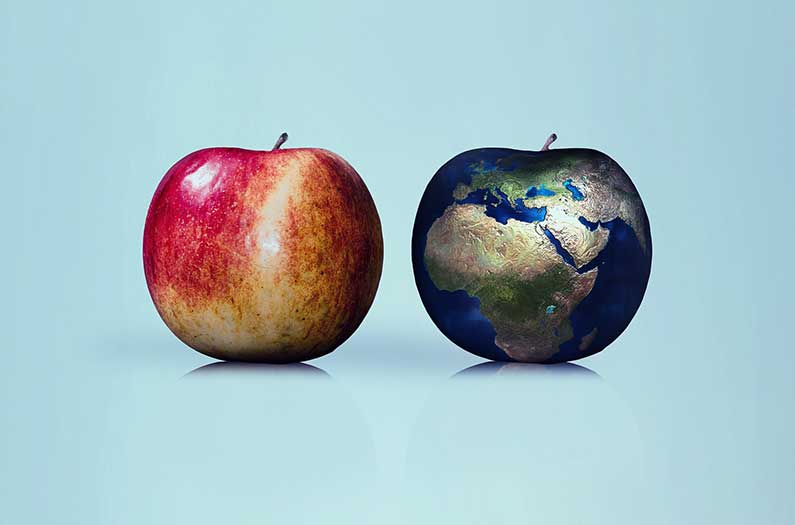 Eating a healthy diet pays off for the environment, too, researchers discover in a new analysis.
By Emma Bryce
November 1, 2019

Foods associated with better health also have the lowest impact on the environment, a new study finds. This suggests that a few key dietary changes could present a double win for humans, and the planet.

The new analysis, led by the Oxford University, revealed several intriguing overlaps between diet, human, and environmental health. For example, increasing the consumption of typically ‘healthy’ foods like wholegrains, nuts, and vegetables was found to produce a low relative risk for diabetes, coronary heart disease, and general mortality. And crucially, the impact of these foods on environmental ills like greenhouse gas emissions, acidification, and land-use was also negligible, compared to other foods.

At the other extreme, the researchers found that processed red meat was conversely associated with the highest risk of diabetes, coronary heart disease, and general mortality. What’s more, processed red meat also had the biggest negative effects on greenhouse gas emissions, acidification, and land-use.

There were a couple of foodie exceptions to this, including sugary drinks, and fish. While fizzy drinks loaded with sugar boost the risk of diabetes, some cancers, and heart disease, the researchers found that their effects on the environment are comparatively negligible. And substituting fish for red meat is known to bring huge benefits to human health – but its environmental record isn’t ideal.

Interestingly, the researchers also found that if a food improved one indicator of health – like diabetes – it was typically associated with positive effects on other aspects of health, too. This was similarly true for the environment: foods that had low impacts on indicators like ocean acidification, say, would typically have positive effects on all other environmental indicators.

In other words, foods may have specific effects on health and the planet, but their impacts also tend to be either overwhelmingly positive or harmful to our health and the environment, overall.

To reveal this interesting interplay, the researchers looked at fifteen of the most commonly-consumed foods – including processed and unprocessed red meat, chicken, eggs, fish, dairy, fruits, legumes, olive oil, cereals, and nuts – and then examined the health and environmental impacts associated with a daily serving of each one. To drill down to the health effects of each food, they looked at whether it increased the risk of Type II diabetes, stroke, coronary heart disease, colorectal cancer, and overall mortality. Then, to grasp how these dietary changes would affect the environment, they weighed up the effects on greenhouse gas emissions, land use, water use, acidification and eutrophication.

What makes the findings unique is that, typically, studies consider the impact of diet on health or the environment in isolation. But by combining the two, this study reveals instances where carefully-crafted policies could deliver a potent double-dose of change for humans and the environment.

One clear example emerged with processed red meat – the worst offender against human and environmental health. Targeted policies to reduce the health effects of processed red meats would be a no-brainer for protecting the planet, too, the researchers suggest.

Take the fact that almost 40% of global morbidity is caused by diseases that are now linked to poor diet – and a rise in meat consumption that’s unfolding across the planet will likely only worsen those stats. That’s clearly a ticking time bomb for human and environmental health. But, changing our diets has incredible latent power to defuse it – if we recognise its power to salve the two at once.

“We now know that making our nutrition a priority will pay dividends for the Earth, as well,” the researchers say.