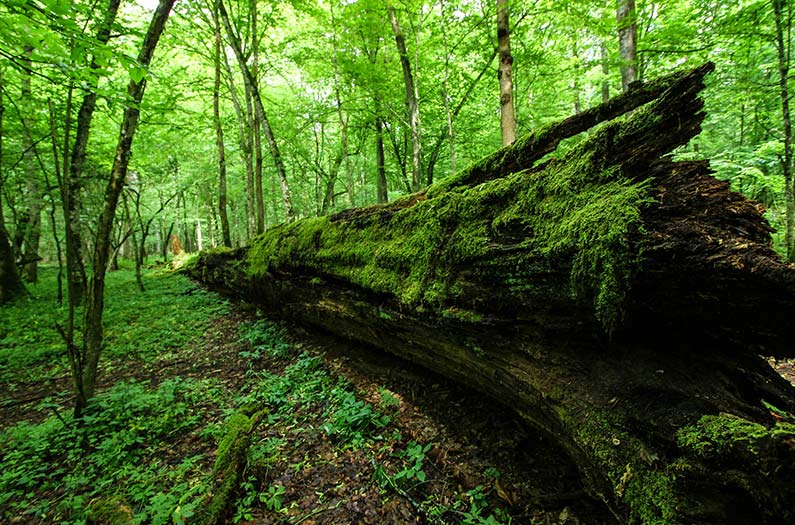 When to let a dead tree lie

It’s often argued that logging trees killed by insects or diseases is beneficial for forests—but evidence is mounting that it causes long-term ecological disruption.
By Brandon Keim
November 20, 2019

When trees are damaged by insects or disease, there’s often pressure to cut them down. It’s argued that “salvaging” these trees is actually beneficial for forests—but evidence is mounting that it causes long-term ecological disruption.

The latest findings come from Białowieża Forest, a 550-square-mile woodland that straddles Poland and Belarus and is a last redoubt of the vast forest that once stretched from France to Russia. Long the protected domain of aristocracy, Białowieża escaped large-scale logging; it’s one of the few places in Europe where natural cycles of wind, fire, and disease still shape a forest at landscape scales.

Only during the last century has logging taken place. A prime target is the dead trees that are present in far larger numbers than in commercially-managed forests, in particular trees afflicted by bark beetles. Salvage logging following outbreaks is presented by supporters as ecologically beneficial, but it “alters the potential for natural regeneration,” says Anna Orczewska, an ecologist at the University of Silesia.

Orczewska is the lead author on a new study, published in the journal Biodiversity and Conservation, of what grows in the aftermath of salvage logging in Białowieża. The forest is set on a new trajectory; “the human ‘clean-up’ attitude,” writes Orczewska and colleagues, “inevitably leads to the homogenization of the forest.”

The researchers looked at the so-called herb layer—low-growing grasses, ferns, and flowering plants—in sites where spruce and pine trees were killed by beetle outbreaks and either logged or left alone. Salvage logging in Białowieża, as in many places worldwide, involves clearcuts followed by removal of trees with heavy machinery and plantation-style replanting.

Several years later, the herb layer in logged sites was dominated by disturbance specialists rarely found within the intact forest. The previous herb layer was largely destroyed by machinery or withered in the suddenly intense sunshine. Their seeds did not sprout. When beetle-killed trees were left alone, though, the original herb layer regrew. Dead trees provided necessary shade; their fallen trunks and branches created pockets of protection from grazing.

Read:  In a first, study explores how airborne microplastics affect the climate

In short, the regrowth that occurred after natural disturbance was dramatically different from that which occurred after human-driven disturbance. And whereas the former represent the first stages in a cycle that will eventually restore the original plant community, the latter represent something different. The new, disturbance-specialized assemblage may persist for decades. “In some cases, it seems that pre-disturbance herb layer assemblages never recover,” write Orczewska’s team.

They argue that salvage logging is actually worse than disease outbreaks for Białowieża’s plant communities—a lesson that, though based in this study on the research in Białowieża, is broadly applicable elsewhere. Natural disturbances create structurally and biologically complex forests.

“In the era of global warming we should eliminate salvage logging, at least in forests which still hold the potential for natural regeneration,” Orczewska says. “Instead we continue cutting.”