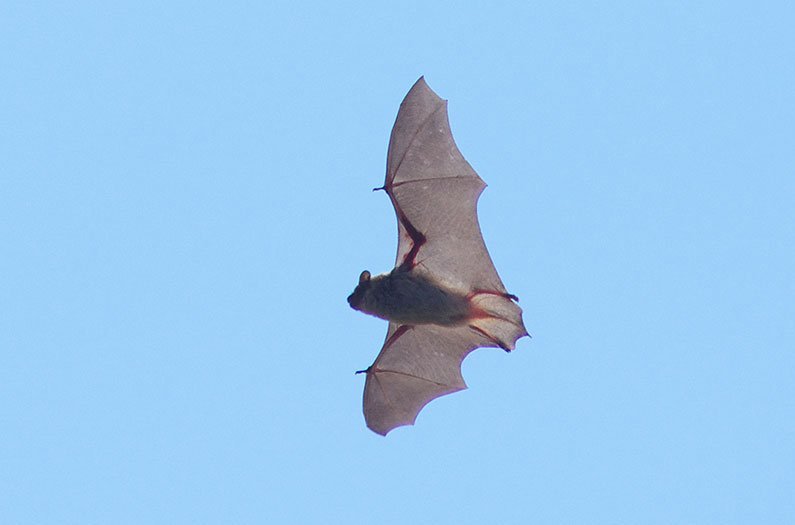 Why not to evict bats from buildings
A new study shows just how important buildings can be for little brown bats, a once-common species ravaged by disease.
By Brandon Keim
November 27, 2019

In less than a decade, little brown bats went from being among the most common North American bats to endangered—but they may have found an unlikely refuge.

“Buildings provide critical habitat for reproductive females,” write researchers in the journal Ecosphere. Their findings “illustrate the value of building roosts as important opportunities for conservation of little brown myotis, especially as populations of this bat in North America continue to decline.”

The new study, led by biologist Joseph Johnson of Ohio University, is not the first to show that buildings provide shelter to bats, but underscores just how vital they can be for Myotis lucifugus, the little brown bat, whose numbers have been ravaged by a fungal disease known as White Nose Syndrome.

Since its emergence in upstate New York in 2006, White Nose Syndrome has spread through much of the continent, killing an estimated seven million bats. Little brown bats were hit especially hard; between that disease, ongoing insect declines, and wind turbines that kill hundreds of thousands of bats each year in the U.S., their future is in jeopardy.

Johnson and colleagues used temperature-sensitive radio transmitters to track individual little brown bats as they moved through Yellowstone National Park. They found that, after emerging from winter hibernation and flying to their warm-weather homes, male bats roosted in trees and rock crevices—but females, who in the summer gather in maternity colonies to give birth and raise their young, roosted almost exclusively in the attics of buildings.

Maternity is a crucial time for any mammal, but especially so for bats, who as a rule are long-lived—little brown bats can live for more than 30 years in the wild—and reproduce very slowly, producing just one pup each year. Data from the transmitters showed that indoor temperatures were particularly stable. Roosting indoors protected mothers from cold nights and cool spells, helping them maintain higher body temperatures and ostensibly promoting the health of their pups.

Discover more:  How to trick your brain into climate action

It’s not just in Yellowstone that buildings may provide a crucial habitat, say Johnson and colleagues. “With populations of little brown myotis declining rapidly,” they write, “protection of building roosts is essential for bat conservation in the Rocky Mountain region and beyond.”

Unlike in Yellowstone, however, where building managers are open-minded to sharing attics and eaves with other species, people often fear bats and are dismayed to find them nearby. “Bat evictions from buildings remains a routine occurrence in the United States, despite warnings of declines in bat colonies in buildings,” write the researchers. It’s imperative that conservationists help people find a way to coexist.

“The long-term viability of vulnerable species requires recognition of critical habitats,” they write, “including those also occupied by humans.”