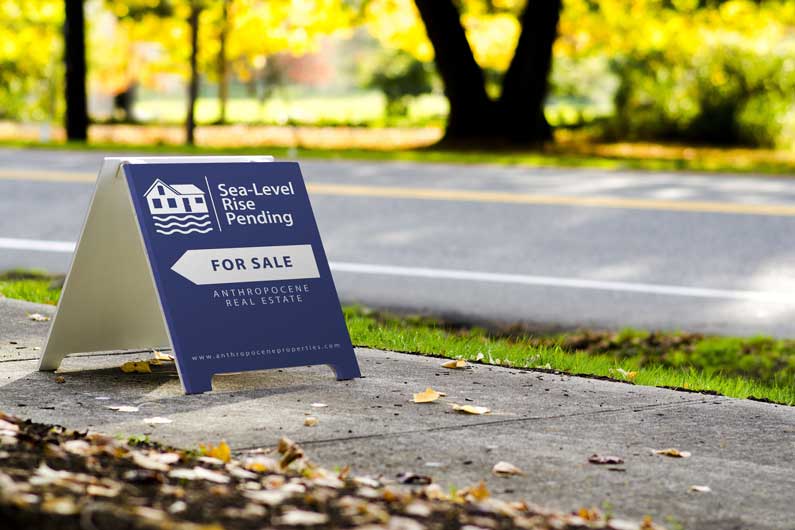 Homes likely to be inundated by future sea level rise currently sell for about 7% more in neighborhoods with a high percentage of climate deniers than similar homes in climate believer neighborhoods.
By Sarah DeWeerdt
November 12, 2019

Want to buy a house by the sea? If your neighbors are climate deniers, you’ll pay a premium, according to a new study.

The analysis focuses on houses that are likely to be inundated by sea level rise in the year 2100. It suggests that such houses sell for higher prices in neighborhoods inhabited by a relatively large percentage of people who reject the scientific consensus on climate change than they do in neighborhoods inhabited by people who accept climate science.

Researchers from the University of British Columbia and the University of Chicago assembled data on sales of more than 10 million homes from the real estate database company Zillow covering the period between 1997 and 2017. They focused on homes within 50 kilometers of the U.S. Atlantic, Pacific, and Gulf Coasts.

They cross-referenced the home sale information with data on climate change beliefs from the Yale Climate Opinion Survey and a National Oceanic and Atmospheric Administration map of areas likely to be inundated by six feet of sea level rise.

The researchers fed their data into a mathematical model of the real estate market. The upshot of this analysis: homes likely to be inundated in 2100 currently sell for about 7% more in neighborhoods with a high percentage of climate deniers than similar homes in climate believer neighborhoods.

The result remains even after controlling for a host of other variables such as home size and amenities, distance from the coast, zoning, housing supply, and income and political affiliation of local residents.

This suggests that the price differential reflects people’s beliefs about future climate risk, the researchers say. Climate deniers think coastal property is a better long-term investment than climate believers do, so they’re willing to pay more for it.

“If everyone were to say, ‘I’m not buying beachfront property here because it’s going to get flooded,’ then prices would collapse. But if you don’t believe in climate change, you might say, ‘You guys are crazy. Climate change isn’t a real thing, so I see a buying opportunity,'” study team member Markus Baldauf of the University of British Columbia said in a statement.

Another way to think of this is that in believer neighborhoods, homes likely to be inundated by future sea level rise sell at a discount. In areas with a relatively high percentage of climate deniers, there’s no relationship between home price and future flood risk.

The United States might be a special case in this regard. These patterns might not apply in other countries where climate denial is less prevalent, Baldauf suggests.

Even within the United States, the strength of these patterns varies from region to region. In California, price differences for homes vulnerable to sea level rise are relatively small from one neighborhood to the next, probably because there is widespread agreement about the reality of climate change. In Florida, the differences between neighborhoods are larger because there is more climate denial.

Source: Baldauf M. et al. “Does climate change affect real estate prices? Only if you believe in it.” Review of Financial Studies 2019.