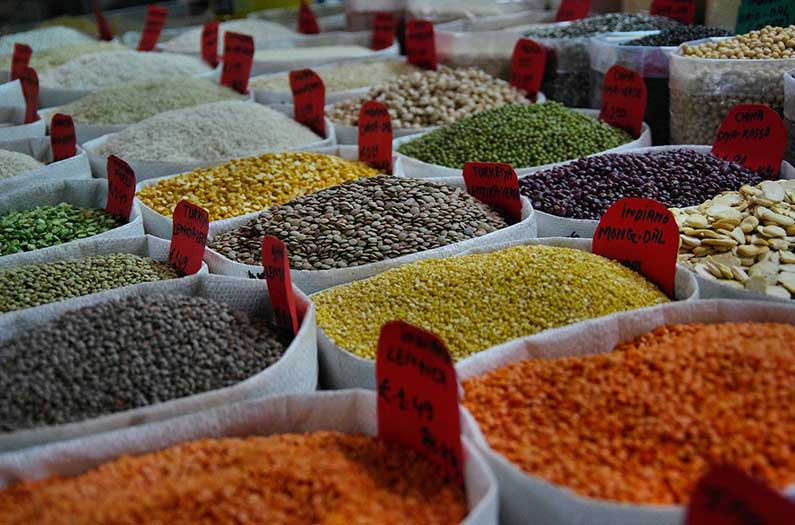 Diversifying Indian crops in the name of nutrition—and the planet

The Green Revolution ensured the dominance of rice in India. But new research reveals the potential benefits of changing that historic legacy.
By Emma Bryce
November 29, 2019

If Indian farmers grew a greater variety of staple cereal crops, it would deliver substantial wins for citizens’ health and the environment, finds a new study.

Published in PNAS, the research shows that if India replaced some of its predominant rice crop with other grains like sorghum, finger, and pearl millet, it would slash the energy use of national cereal production by up to 12%, water-use by almost a quarter, and greenhouse gas emissions by up to 13%. The greater diversity of grains would also boost protein availability by between one and 5% in people’s diets, and iron by up to 49%.

On top of this, the hypothetical switch to more diversified crops would increase overall climate resilience of cereals by 13%, because the wider variety of grains would withstand drought better, and therefore incur fewer losses than the water-dependent rice crops that currently dominate India’s agricultural landscape.

What’s more, all these changes could unfold without affecting the quantity of production in India’s cereal sector, and without increasing the area needed to farm it, the new study explains.

Why does India find itself in this rice-heavy predicament, in the first place? The country’s current agricultural make up is the legacy of the Green Revolution in the 1950s and 60s, a period that brought high-yielding crop varieties to developing countries, with the aim of dramatically boosting global production of staple foods like wheat and rice. In India, this led to an explosion in rice production: it now makes up 44% of the country’s cereal production. But this has come at the expense of other grains that are nutritionally more valuable.

Decades on, there are high rates of under- and malnourishment in India: in particular, anemia rates are exceptionally high in women, linked to heavy consumption of rice which is low in iron. And, with high rates of water consumption, and relatively high greenhouse gas emissions, rice has not proved to be the most sustainable crop. Nor is it the most reliable, given that it’s so susceptible to drought.

So there’s a strong case to be made for a more diversified crop base, the researchers propose.

They made their findings by calculating what it would take to deliver several agricultural objectives, among them ensuring a steady iron supply, reducing greenhouse gases, and boosting climate resilience.

Then, using crop-specific data on production, energy-use, and emissions, they showed how replacing some of India’s rice crop with three other cereal crops besides rice – sorghum, pearl and finger millet – would change nutrition and environmental impact. (These three crops were chosen because the Indian government is actively seeking to increase their production across the country.)

The analysis revealed that to deliver on these climate and nutrition goals, the share of these three crops in cereal agriculture would rise from the current 14%, to between 21 and 32% .

In reality, it’s not a simple fact of exchanging rice for other crops. There are economic drivers that determine a lot of agricultural choices: farmers are unlikely to make the switch to rice alternatives unless they know it’ll be as lucrative. Likewise, consumers need to be able to afford these other cereals, and also be willing to change their diets, for these changes to work.

Even so, the researchers emphasise the problematic historical legacy of Indian agriculture: “Many of the challenges resulting from the Green Revolution persist, and solutions tailored to local conditions are urgently needed,” they write. Recognising the flaws in a decades-old farming system – and pondering how different it could look – could be an important first step towards that goal.