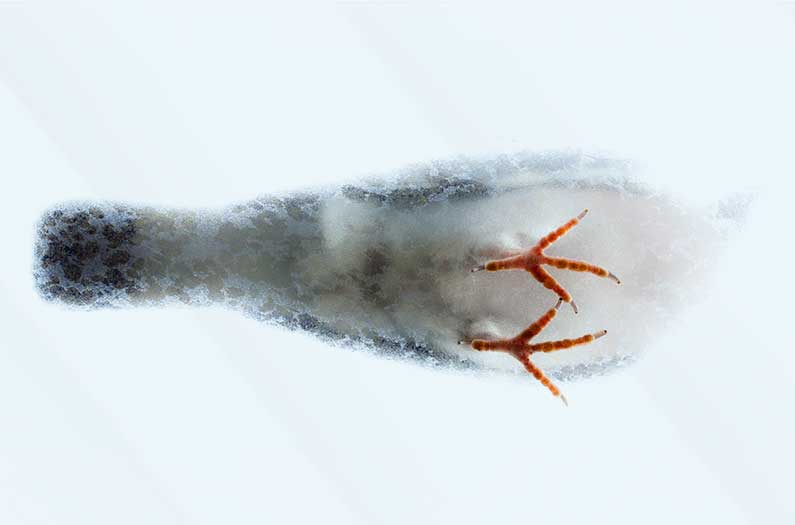 What pigeon feet say about the way we live

Pigeons are a symbol of urban life—so much so, in fact, that the condition of their bodies is a literal reflection of the environments they share with us.
By Brandon Keim
November 13, 2019

Consider the pigeon: often maligned, sometimes appreciated, and ubiquitous in cities worldwide, they’re a symbol of urban life—so much so, in fact, that the condition of their bodies is a literal reflection of the environments they share with us.

Scientists have previously found that pigeon feathers are a convenient biomarker of urban heavy metal pollution. And in a new study published in the journal Biological Conservation, researchers led by Frédéric Jiguet, an ornithologist at the French Museum of Natural History, turn their attentions towards pigeon feet.

Eagle-eyed urbanites will have noticed that these are prone to strange lumps and missing digits. The causes are debated: perhaps it’s disease, or standing in excrement, or the chemical and mechanical measures used to discourage perching. Another possibility is what’s known as “stringfeet,” produced when a string or hair wraps around a pigeon’s digits, cutting off circulation until the tissue dies and falls off.

To investigate, Jiguet’s team measured pigeon health and local environmental conditions at 46 sites around Paris, France. They found no correlation between foot deformities and immune system status, suggesting disease was not to blame. Furthermore, when a bird had one mutilated foot, the other foot was no more likely than usual to be similarly deformed. Were a pathogen involved, both feet would be afflicted.

But the researchers did find a link between foot deformities and air and noise pollution. They don’t think that pollution itself causes harm; rather, they’re proxies for human activity and population density, which in turn result in pigeons encountering more hair and string. Conversely, where locales had more parks and natural areas, rates of foot deformities decreased.

Though pigeons are certainly exposed to plenty of pathogens, “as long as their toes are concerned, pigeons are victims of urban human-based pollution,” write Jiguet and colleagues.

The implications are twofold. First of all, “we should pay attention to better manage our street wastes to protect wildlife health,” the researchers write. “There is no ethical reason for accepting that pigeons should suffer from mutilation due to human development without trying to reduce their pain.”

Secondly, because pigeon health is so tightly bound with local circumstances—their home ranges are about one-third the size of a typical Manhattan city block—their physical state is telling. Just as people can measure their feather composition to gauge local conditions, so can we “also count on their fingers,” advise Jiguet’s team. When pigeon feet are deformed, it’s a sign that the neighborhood needs less trash and more greenery.