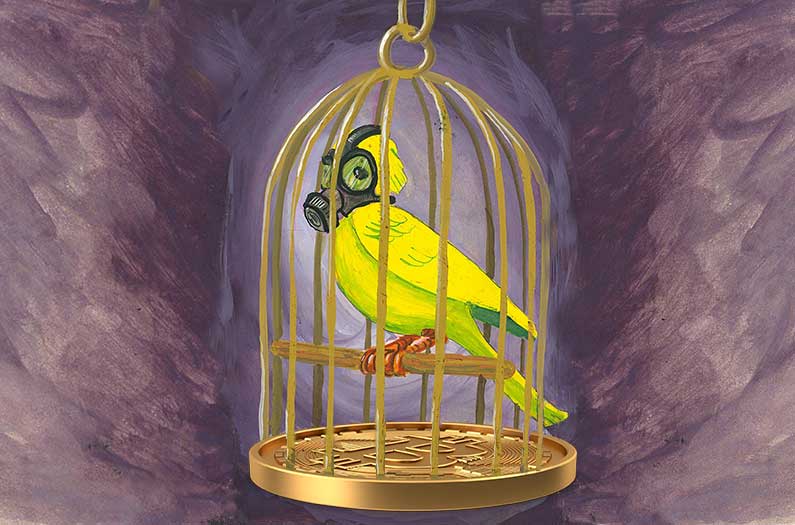 Cryptocurrency mining harms human health as surely as traditional mining
The social costs of mining cryptocurrency will outstrip the value of the coins well before mining them becomes unprofitable, a new study suggests.
By Sarah DeWeerdt
November 26, 2019

Production of cryptocurrency units like Bitcoins is often referred to as ‘mining.’ This is a metaphor: the coins are actually secured via computers solving algorithms. But this process has real-world impacts. Each $1 of Bitcoin value created in 2018 was responsible for $0.49 in health and climate damages in the U.S. and $0.37 in China, researchers report in a new study.

The reason is that cryptocurrency mining uses a lot of electricity. Moreover, because of the way most cryptocurrencies are structured, the more coins that have already been produced, the harder the mining algorithms are to solve — so the electricity requirements are constantly increasing, along with the associated damages.

Last year, researchers calculated the electricity use and corresponding carbon emissions for four of the most prominent cryptocurrencies: Bitcoin, Ethereum, Litecoin, and Monero. They found that Bitcoin mining alone used more electricity in 2017 than did all of Ireland or Hong Kong. Between the start of 2016 and mid-2018, the four cryptocurrencies together were responsible for between 3 and 15 million tonnes of carbon dioxide emissions.

The new study builds on those findings. Researchers at the University of New Mexico in Albuquerque first collected data on emissions of various pollutants associated with each kilowatt hour of electricity generation in the United States and China, two countries where a lot of cryptocurrency mining occurs. They used this to calculate the health and climate impacts – which they term ‘cryptodamages’ – per coin created.

Their estimate of climate damage is based on carbon dioxide emissions associated with electricity production. The estimate of health damages is based on exposure to fine particulate matter known as PM2.5, nitrogen oxides, and sulfur dioxide, all of which are known to increase the risk of premature mortality. In some cases they extrapolated from more extensive U.S. data to make estimates for China.

In 2018, “the human health and climate damages caused by Bitcoin represented almost half of the financial value of each U.S. dollar of Bitcoin created,” the researchers write in the journal Energy Research & Social Science.

In China, climate change accounts for about 89% of cryptodamages, while the remaining 11% are due to human health effects. In the United States, about 60% of cryptodamages represent climate impacts and 40% health impacts.

This is because emissions associated with electricity production are higher in China than in the United States, but a measure that represents the economic losses from premature death is much lower (reflecting lower wages in China).

In fact, cryptocurrency mining in China takes a heavy toll in premature mortality. Every 50,000 Bitcoins mined in China are associated with 12 additional deaths due to particulate matter exposure, the researchers calculated.

Over time, the amount of electricity required to produce cryptocurrency coins has increased and the value of those coins has fluctuated. This means that mostly, the net benefit of cryptocurrencies to society has been eroding. In December 2018, damages from Bitcoin mining in the United States amounted to $0.95 for every $1 value of the coins.

It’s well known that, because of the ever-increasing effort required to mine coins, at some point a given cryptocurrency will no longer be profitable to mine. The researchers argue that it’s likely that the cryptocurrency’s social costs will outstrip its value well before that point of unprofitability.

Cryptocurrency miners tend to locate in areas with cheap electricity. But the cheapest electricity isn’t necessarily associated with the lowest environmental and health damages. And it’s hard to regulate and tax cryptocurrency mining in a way that would hold miners accountable for these damages. The development of new systems of cryptocurrency that aren’t so energy intensive could be a way to resolve this problem, the researchers suggest.

Image: Based on artwork by David & Angie.