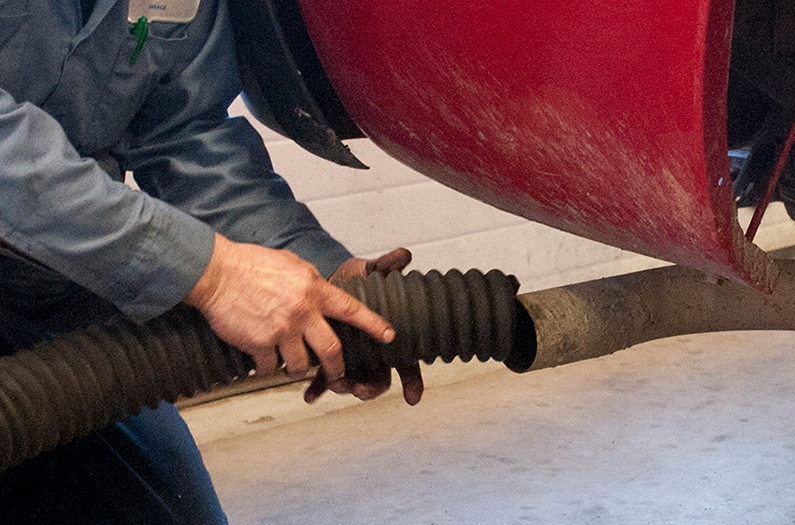 How the trucks of the future could go green with 90% less carbon emissions
Carbon capture is more difficult on moving vehicles than stationary smokestacks. But a proposed new system could make it feasible.
By Sarah DeWeerdt
January 7, 2020

A team of scientists in Switzerland has come up with a strategy for capturing CO2 from the tailpipes of large vehicles such as delivery trucks and buses. The approach could help solve one of the more difficult decarbonization puzzles of daily life.

Road transport is responsible for a hefty chunk of carbon emissions – almost a quarter of all human-caused CO2 emissions in Europe. Electric cars hold a lot of promise for decarbonizing personal transport. But for larger vehicles, the batteries required would be too big and heavy. Biofuel is dicey too, because of concerns that growing feedstock would compete with food production and space for natural ecosystems.

So how about carbon capture? That is, collecting the carbon dioxide from vehicle exhaust and keeping it from entering the atmosphere.

There’s a lot of chatter about “scrubbing” carbon emissions from exhaust stacks of power plants and factories. But this strategy is muchmore complex to implement for trucks. There are a lot of vehicles on the road, they don’t stand still, each one produces relatively little CO2 and does so intermittently, and captured CO2 would need to be stored in the limited space available on the vehicle.

But researchers from the École Polytechnique Fédérale de Lausanne say that combining several existing technologies could enable carbon capture on delivery trucks, as well as other large vehicles such as buses, ships, and trains.

They propose using a specialized material that grabs and holds onto CO2 molecules to separate the gas from the vehicle exhaust. Once the material is saturated, it is heated to recover the CO2. This process is known as temperature swing adsorption. The CO2 is then compressed and liquified, and stored in a tank.

Discover more:  Aim low when designing the climate-friendly city of the future

“The CO2 capture system has energy self-sufficiency, and does not require any external power,” the researchers write in the journal Frontiers in Energy Research. Instead, it all runs on waste heat from the vehicle’s engine. This uses an approach known as the Rankine cycle that has previously been employed to capture waste heat from engine exhaust and cooling systems to help power trucks and cruise ships.

When the truck visits a filling station to fuel up, it could also offload its liquid CO2. Finally, the CO2 could be sequestered underground, or used to produce green fuel or chemicals using renewable solar electricity.

The researchers designed their system to permit a full day’s operation of a delivery truck, crisscrossing a city to travel 250 kilometers in 8 hours. They calculate that their system could recover 90% of the truck’s CO2 emissions – 2.11 kilograms of CO2 per liter of diesel fuel burned.

They say that the CO2 capture could happen in a box that will fit on top of the truck’s cabin. The liquid CO2 could be stored in a tank below the cabin for ease of access.

That means their system could be used to retrofit an existing trucking fleet, rather than requiring purpose-built vehicles like electric or hydrogen-fueled vehicles – a major advantage.

For now, this is all in theory. The numbers look good on paper. The researchers plan to build a prototype of their system to test how well it works in practice.