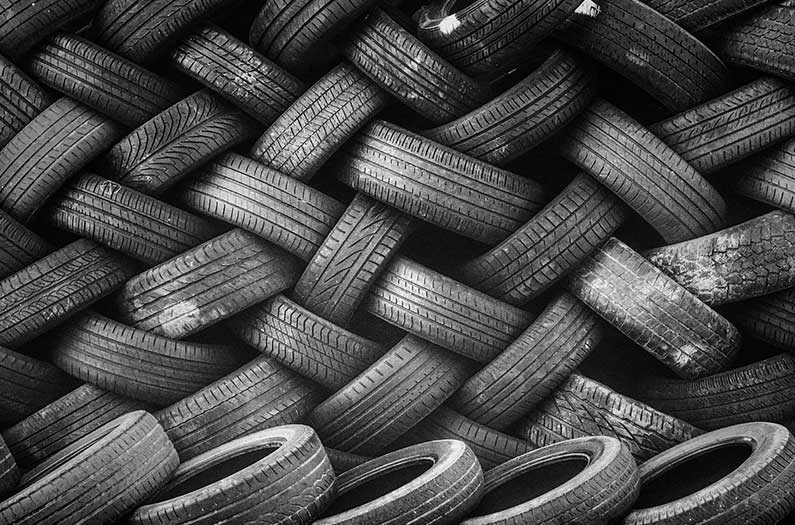 Tires are notoriously difficult to recycle. A new technique could change that.
By Prachi Patel
January 23, 2020

Here’s a new way to keep old tires going round and round. By recycling them, that is. Researchers have found a simple, efficient way to break the strong bonds in tire rubber, which could make them easier to recycle.

The world produced a staggering three billion tires in 2019 alone. Tires are meant for single use, typically lasting three to four years before their tread wears out. At the end of their lives, some are shredded and turned into artificial field turf or playground surfaces. But many end up burned or in landfills, releasing toxic chemicals into the air or leaching them into the ground.

Unlike for plastics, which is also derived from petroleum, recycling the polymers in tire rubber has been challenging. “The properties that make tires so durable and stable on the road also make them exceptionally difficult to break down and recycle,” says Michael Brook, a professor of chemistry and chemical biology at McMaster University in Canada who led the research published in Green Chemistry.

Manufacturers convert soft rubber into the hard rubber used for tires using a process called vulcanization, which involves using sulfur chains to tie together organic molecules into a tough network. These bonds are difficult to break.

Brook and his colleagues have found a relatively mild process to do that. They chop up the tires into small pieces and pulverize the pieces into crumbs. Then they mix the powder into a silicone and catalyst solution that is heated to 100°C. After filtering out a residue of carbon, silica and metal from the end product, they get a yellowish oil comprised of the same polymers that are used as raw materials for tires.

The process worked with bicycle inner tubes and old truck tires that the researchers collected at a local garbage dump. The team used the recovered oil to make new tires for a toy car. The residue was reused as a reinforcing agent in the new rubber.

There is still more work to be done, Brook says. The catalyst is expensive and the researchers are now trying to reduce the amount needed for the reaction. And they are trying to assess the range of products that could be made with the recovered material.