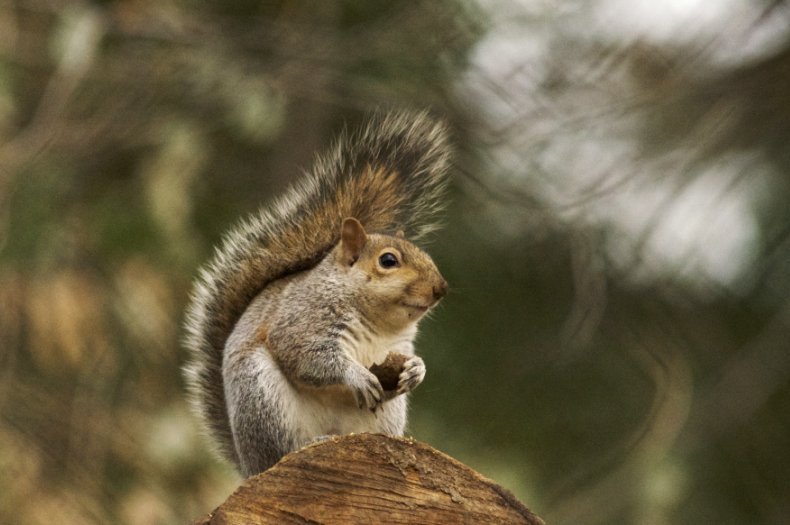 Whether and how forests adapt to climate change may be as much about animals as trees.
By Brandon Keim
January 8, 2020

When we think of future forests and wonder whether beloved, ecologically important tree species will cross the chasm of climate change, consider that resilience might come from an unexpected place: squirrels and their kin. It’s these small woodland creatures who will ultimately carry seeds from old homes to new.

Despite their importance, however, few scientists have studied precisely how such animals react to unknown seeds. What happens when, at the edge of an expanding range, a squirrel or a vole encounters a nut or a fruit they’ve not previously seen? “We cannot take for granted that animals will disperse any random seeds,” says Alessio Mortelliti, a biologist at the University of Maine and lead author a new study, published in the journal Oikos, on the meeting of critters and novel trees.

“The way in which this interaction subsequently unfolds could have dramatic consequences,” write Mortelliti and colleagues, and “may play a major role in determining which species will successfully expand.” Their study took place in eastern Maine, where some 64 woody plant species now reach their northern limits, making the region a living laboratory for range shifts.

The researchers picked 18 species expected to migrate further north in the near future—among them shagbark and bitternut hickory, spicebush and sassafras, chestnut oak and black oak—and, at 131 locations throughout Acadia National Park, set seeds of these novel plants beside those of familiar local species. They monitored these setups with motion-activated cameras. At other sites they focused on especially large seeds, such as acorns and hickory nuts, tagging them with labels that allowed their later recovery.

Local small mammals found the novel seeds to be quite appetizing. Sometimes they even preferred them. And while many of the seeds were completely consumed, others ended up dropped or buried and forgotten—a crucial stage in the cycle of forest growth. About one-third ended up in places well-suited to grow, such as beneath leaf litter or within fallen logs; larger seeds were especially likely to germinate.

In a nutshell, small mammals did their seed-dispersing job with new species as well as old—and that’s something to which people should pay more attention, advise Mortelliti and colleagues. Scientists trying to predict plant migrations need to include small mammals and other seed dispersers in their models; people hoping to nourish future forests might regard these creatures as partners in conservation.

Mortelliti’s team is now studying the impact of roads on seed dispersal and  plant migration. They’re also interested in how animal personality affects these activities. As human pressures favor the evolution of certain behavior types—bold or shy, anxious or easygoing—that may in turn shape how seeds are spread. Whether and how forests adapt to climate change may be as much about animals as trees.