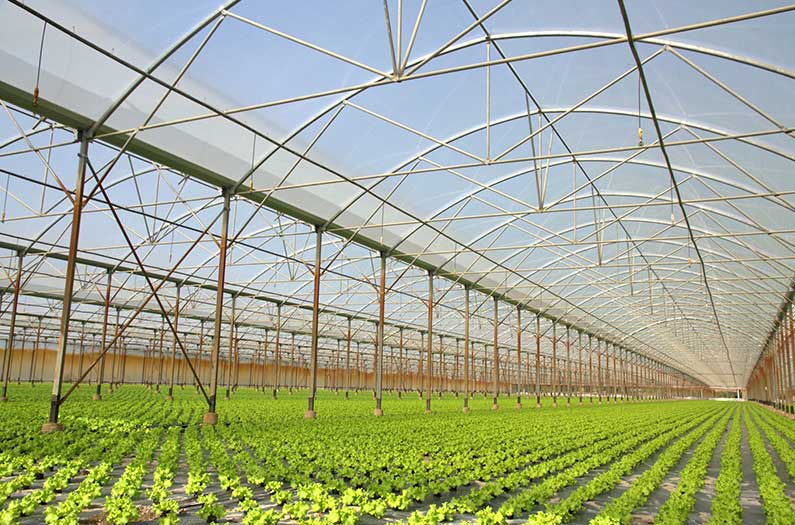 Future greenhouses could be made energy-neutral by integrating semi-transparent organic solar cells into their panels, a study shows.
By Prachi Patel
February 13, 2020

Greenhouses with glass panels made of see-through solar cells could be completely energy-neutral in some climates, according to a study published in Joule. Such zero-energy greenhouses could be a big step forward for environmentally sustainable agriculture.

Feeding a growing world population is putting enormous stress on land and water resources. Greenhouses promise to reduce the environmental impact of agriculture by using land more efficiently while reducing water and pesticide use. The downside is the large amount of energy greenhouses need for heating and cooling.

So researchers from North Carolina State University used a computer model to calculate the amount of energy a greenhouse with solar modules integrated into its structure would produce in different climates. The model tested if that energy was enough to meet the demand of greenhouses growing tomatoes in three locations: Phoenix, AZ, Raleigh, NC, and Antigo, WI.

The team chose organic solar cells, which in addition to being low-cost and thin and lightweight so they can be easily integrated into the glass roof and wall panels of greenhouses. And most importantly they can be tuned to absorb certain wavelengths of light. “Plants only use some wavelengths of light for photosynthesis, and the idea is to create greenhouses that make energy from unused light while allowing most of the photosynthetic band of light to pass through,” said professor of mechanical and aerospace engineering Brendan O’Connor.

The solar cells would still absorb some of this light that plants need, so growers would trade off a fraction of plant growth to reduce their energy bills. But this impact on plant growth would be negligible depending on location. In hot sunny Arizona, the solar greenhouses could be energy neutral while blocking 10% of sun that the plants need. There, the solar cells could also replace the shade-cloths used to provide cooling for a large portion of the year, say the researchers.

Recommended Reading:
Seed dispersal is plummeting just when plants need to move most

In North Carolina, the greenhouse would block 20% of sun to be energy-neutral. And in cold, cloudy Wisconsin, greenhouses could not achieve zero-energy use, but could still generate half of their energy needs.