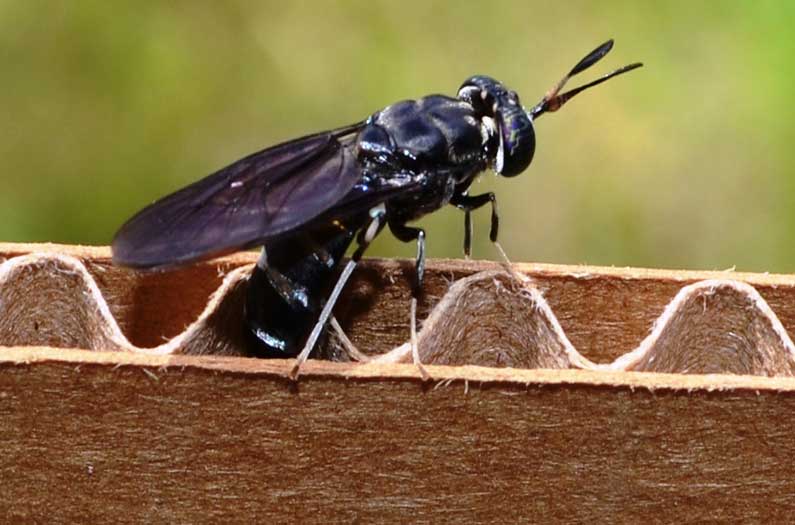 Soldier flies, an army that can tackle urban waste and make sustainable plastic

Researchers have found a novel way to tackle food waste and create a sustainable, closed manufacturing loop where trash becomes raw material for new products. By harnessing common black soldier flies, whose larvae are used to compost organic waste, the new process transforms food and other organic waste into a plastic-like material. This sustainable plastic can be 3D-printed to mass-produce objects that would biodegrade at the end of their lives.

“The process presented here allows for the first time a general route to embed manufacturing within its surrounding ecosystem,” the team writes in Scientific Reports.

Humans create about 2 million tons of solid waste every year, with urban residents generating four times as much as those in rural areas. About 60 percent of that garbage is organic matter from food, vegetables, and garden waste, while another 30 percent is paper, cardboard, textiles, and other cellulosic materials. 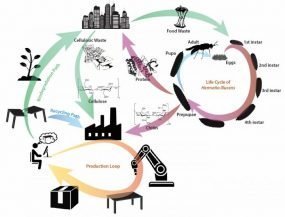 ago, researchers at the Singapore University of Technology and Design developed a strong, inexpensive, and biodegradable bioplastic called fungal-like adhesive materials (FLAM). The material, inspired by the walls of fungus-like microorganisms, are made of two most abundant biological polymers, cellulose and chitin.

Cellulose is the main component of plant cell walls and can be extracted from paper and textile waste. Chitin, meanwhile, is found in the exoskeletons of crustaceans and insects. It is mainly produced today from crustacean shells, a byproduct of the fishing industry.

So instead, the researchers propose using black soldier flies as the source of chitin. Chitin makes up about 6–9% of the bugs’ weight. Growing the larvae on urban food waste, and then processing them to extract chitin when they are becoming pupa, which takes less than 14 days, could give chitin on industrial scale.

In this way, FLAM could be made entirely from human-generated food and cellulosic waste. The FLAM could then be 3D-printed into any large object such as furniture or toys. And at the end of the object’s life, the products could be composted or broken down to recover the cellulose and chitin. The result? A perfectly circular manufacturing economy that also chips away at the growing urban waste problem.