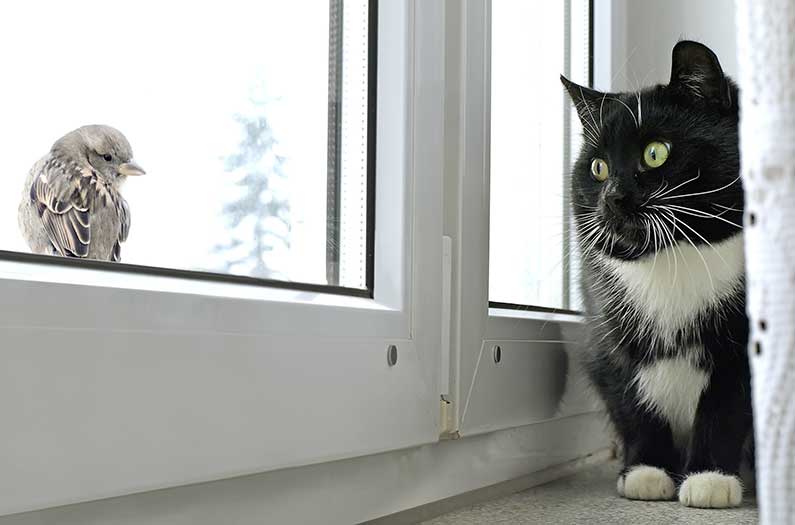 While cats' domestic traits make them an inextricable part of human society, their wild traits keep them outside of our control.
By Cara Giaimo
March 11, 2020

Cats contain multitudes. They can squeeze through a barely open door and, moments later, seem to triple in size as they sprawl out on the carpet. In the blink of an eye, they’ll go from solicitous to aloof, playful to peeved, or awake to asleep. They inspire equally divided reactions in people: some consider them pure menaces to birds and other wildlife, while to others, they’re beloved pets.

According to a recent paper in Trends in Ecology & Evolution, all of these contradictions make sense when you consider the cat’s history. Unlike other companion species, “the cat maintains liminal status as both a domestic and a wild animal,” the authors write. While cats’ domestic traits make them an inextricable part of human society, their wild traits keep them outside of our control. And if we want to manage them, the authors argue, we have to understand both sides.

As far as archeologists can tell, cats “self-domesticated” about ten thousand years ago, choosing to hang out near human communities because our habit of storing grains dovetailed nicely with their taste for rats and mice, the authors write. When people saw how good cats were at pest control, they started bringing them on sea voyages and to new settlements  — and eventually, taking them into their homes and apartment buildings, and uploading videos of them onto Youtube.

But although the world changed has changed a lot during that time, cats haven’t. Yes, they have learned to meow, wind charmingly around people’s ankles, and eat food from cans. But unlike dogs and horses, domestic cats “exhibit comparatively few morphological changes compared with their wild ancestors,” the authors write. They also don’t need us: Cat communities can still thrive on their own, as anyone who has seen a feral cat colony can tell you.

In other words, “they maintain a double identity,” the authors write. “The dual status of the species as both wild predator and domestic companion underpins” an attendant division among people. Conservationists consider the wild side of cats to be their most important trait, and think unowned ones should be managed accordingly — trapped and sterilized, relocated, or even lethally removed from wild landscapes. Meanwhile, feline advocates urge us to treat all cats, including feral ones, with the compassion we usually show to our domestic companions.

A good path forward involves recognizing both sides of cats, the authors say — bringing together experts in everything from veterinary science and zoonotic diseases to ecology and sociology in order to understand how cats affect other species, and involving cat owners in policy research and testing (which some researchers are already doing). An “interdisciplinary companion animal ecology,” they write, can help us tease out the relationships between all of these issues, and make good management decisions about this boundary-crossing creature.

After all, we’re not so straightforward ourselves. As the authors point out, “people who identify themselves as conservationists often keep cats as pets.” It makes sense: Who can resist watching a partly wild creature take a nap in a sunny spot?