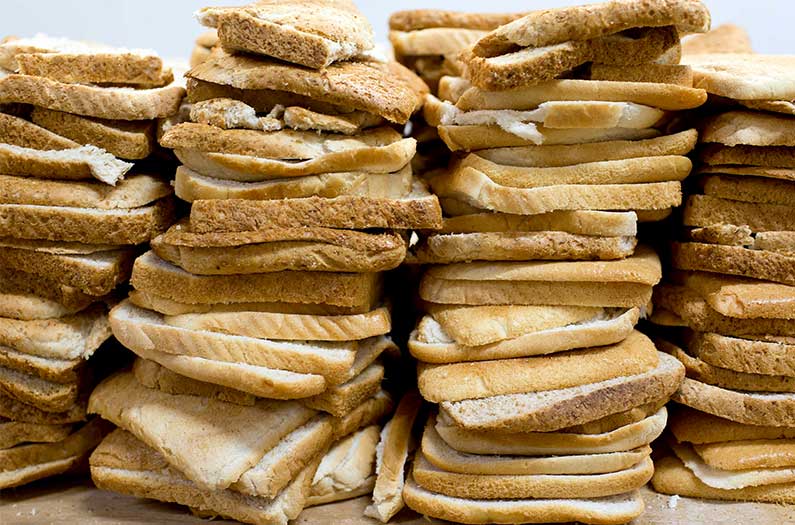 Bread waste could be repurposed for the food industry

We waste hundreds of tons of bread daily. But now a team of researchers has devised a better use for these discarded carbs.
By Emma Bryce
March 6, 2020

Wine, cheese, yoghurt and bread: all these culinary delights owe their existence to the work of microorganisms like bacteria, yeast, and mould, which create the fermentation process that’s so essential to the flavor of these foods. But with their voracious appetites, these microbes need a substrate to continuously feed on. And according to researchers, the tons of wasted bread we usually heap into landfills each year could provide the ideal, sustainable feast.

The new study, published in Frontiers in Microbiology, describes the invention of a microbe feed mixture—what’s known as a ‘starter’—containing 50% wasted bread, provided by leftovers from commercial sandwich production. When combined with enzymes and other supplements, the researchers discovered that this repurposed bread not only created a nutritious base for multiple different microbes, but also cost three times less to make than regular substrates, which are usually produced from several raw materials to feed microbes.

For the bakery industry, repurposing bread waste instead of sending it to the landfill could provide a new revenue stream – and could also bring down the industry’s emissions footprint, the researchers say. Indeed, it’s estimated that we waste several hundred tons of bread across the planet every day: as food products go, bread is particularly susceptible to wastage because of its limited shelf-life, heavy losses during manufacturing, and consumer preferences for products like crustless bread – which destine plenty of perfectly good bread to the bin.

Once in the landfill, these wasted carbs generate harmful gaseous emissions as they decompose, and also represent a lot of lost money and other resources, like water that’s used in the cultivation of wheat and manufacturing of bread.

Recognizing this missed opportunity for the food industry, the researchers, from the University of Bari Aldo Moro in Italy, experimented to develop the ideal recipe for microbial growth. They tested more than 40 different conditions in the recipe-making to determine how it affected microbe metabolism – tweaking the quantity of bread in the mixture, the concentration of added enzymes, as well as the amount of time and the temperature at which the bread mixture was left to incubate.

Once they’d optimized the mixture, they fed it to a range of microorganisms to test their response. This proved that the mixture was comparable to other standard industry feed stocks, in that it enabled similar levels of microbial growth. In particular, two species of microorganisms commonly used to make yoghurt, one used widely in cheese production, and several used in wine fermentation, flourished when they feasted off the new, more sustainable feed.

And conveniently, the researchers also discovered that the bread waste mixture could successfully be used as a starter for bakeries – which usually have to specially buy in starters from other companies in order to make their loaves. By recycling their own bread waste for this purpose instead, it would slot in perfectly with what the researchers call “the modern vision of a circular economy” – potentially closing this loop in the industry, and bringing its carbon footprint way down.

The study authors emphasize that they still need to do more research to maximize the production efficiency of their wasted bread feedstock, and bring it in line with current industrial standards. But considering that the ultimate aim is to make some of our most beloved foods more sustainable, this feels like a welcome start.

Source: Verni et. al. “Wasted Bread as Substrate for the Cultivation of Starters for the Food Industry.” Frontiers in Microbiology. 2020.