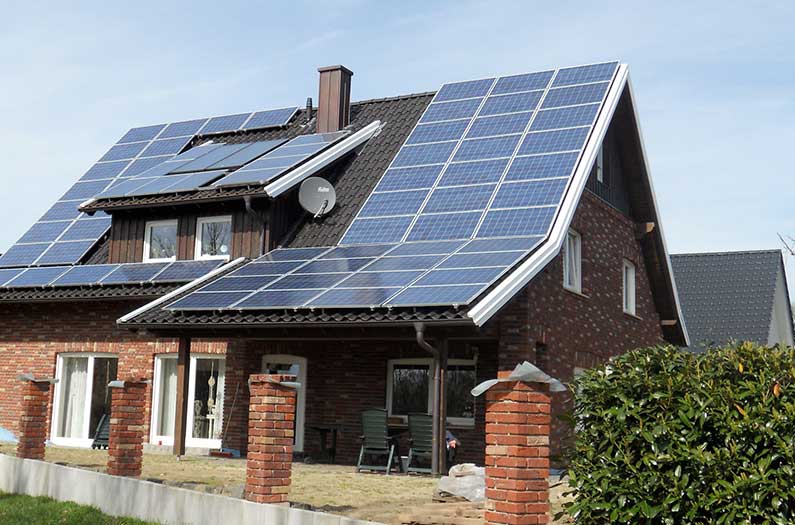 But you might still want to stay connected to the grid—unless you live in an apartment building.
By Sarah DeWeerdt
March 10, 2020

Energy self-sufficiency—that is, the idea of a region, a city, or even a single building producing all the renewable energy needed locally—holds a lot of intuitive appeal. But is it realistic?

An analysis of solar panel potential in Switzerland suggests that this goal could be within reach by 2050 for households in many industrialized countries, assuming a reasonable pace of improvements in technology. But there are costs and tradeoffs.

One of the challenges is that household electricity demand in 2050 is likely to be higher than it is today. There’s a push to electrify all aspects of daily life in order to reduce carbon emissions. So as people move away from fossil fuel-powered furnaces and gasoline cars, they’ll require more electricity for home heating and charging electric cars.

Ursin Gastöhl and Stefan Pfenninger at ETH Zürich gathered existing data from a variety of sources to analyze the potential for energy independence in 16 different scenarios. They looked at single-family homes versus multi-family buildings; new versus retrofitted buildings; high versus low energy demand for home appliances, lighting, and other devices; and urban versus rural driving patterns.

In general, it’s easier for single-family homes to achieve energy self-sufficiency, the researchers reported last week in PLoS ONE. Multi-family buildings struggle quite literally because they have more people living under one roof—and that one roof may not have enough surface area for the solar panels required to meet electricity demands.

The more solar panel efficiency improves, the easier it will be for multi-family buildings to achieve energy self-sufficiency. In some cases it may be necessary to put solar panels on the facades of buildings as well as the roof.

In their analysis, the researchers took into account the fact that the amount of sunshine varies throughout the year, as does energy demand for home heating. They assumed that when solar energy cannot cover immediate electricity demands, residents of fully self-sufficient buildings will have to rely on stored energy, with short-term storage provided by lithium-ion batteries, and long-term storage by hydrogen systems.

Those systems are expensive to install and maintain. In most cases, the best option from an economic point of view is likely to be a fully electrified home that remains connected to the grid for backup when solar panels can’t generate enough electricity. The good news is that the researchers project this will be cheaper than having a grid-connected home with fossil-fuel heating and gasoline cars.

“Thus, there is a clear case for full electrification, but there is a substantial premium to be paid for full self-sufficiency,” the researchers write.

However, multi-family buildings may have an economic advantage when it comes to full self-sufficiency. That’s because the cost of batteries and hydrogen systems will be spread over more residents.

If governments want to encourage households to become energy self-sufficient, they should subsidize the cost of electric heat pumps and storage technologies, the researchers say. Getting rid of fossil fuel subsidies or adding taxes on fossil fuels would also boost the economic attractiveness of renewable systems.

Source: Gastöhl U. and S. Pfenninger. “Energy self-sufficient households with photovoltaics and electric vehicles are feasible in temperate climate.” PLoS ONE 2020.