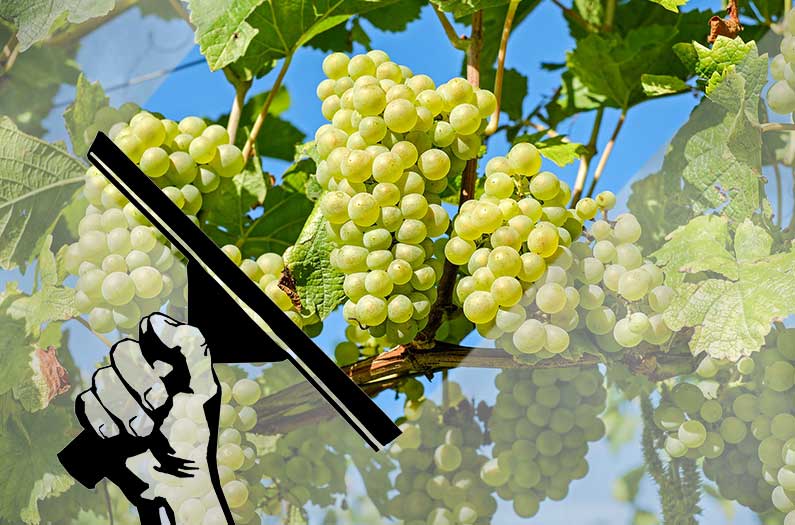 Grapes, nectarines, peaches and almonds are just some of the California crops that have been boosted by cleaner air in recent decades. That means bigger earnings for farmers, too.
By Emma Bryce
March 27, 2020

Reigning in pollution could pay off with more than just cleaner air: a new study finds that improvements in air quality over the agriculturally-rich state of California in the last 35 years have also boosted yields of perennial crops like wine grapes, nectarines, and almonds, generating significantly higher earnings for farmers there. And, farmers could go on to benefit even more in the future, if controls on air pollution are maintained.

These findings, published in Nature Food, show that between 1980 and 2015, levels of ozone declined steadily over California, thanks to stricter air pollution regulations. Ozone arises from a reaction between nitrogen oxides – a group of gases that are common in polluting emissions – and airborne volatile organic compounds, in the presence of sunlight. Circulating in the air, ozone gets into plants via their stomata and disrupts photosynthesis, which in turn curbs plant growth.

But the lessening of ozone in Californian skies over the last 35 years has enabled more growth in valuable perennial crops like almonds, grapes, strawberries, peaches, nectarines, and walnuts, the researchers found. What’s more, this yield increase has led to a surge in profits for farmers of $600 million a year, they discovered.

The researchers, who were led by academics from the University of California, Irvine, also found that despite the successful declines in air pollution levels over the last 35 years, in an ideal hypothetical scenario where there was absolutely no ozone for crops to contend with over this period of time, yields would actually have increased from between 2% (for strawberries) up to 22% (for table grapes.)

This showed up just how big pollution’s impact on agriculture has been – and continues to be: crucially, despite air quality improvements in recent decades, California still has some of the worst ozone levels in the country. In fact, the researchers calculated that crop yields that are currently sacrificed to pollution represent over $1 billion in lost income there each year.

Using the historical data as context, the researchers also looked forward, projecting out to 2050 how crops would fare under different potential climate scenarios if ozone continued to go down. This revealed that further pollution declines could lead to increases in perennial crop yields from 5% for wine grapes, to 8% for nectarines, and a substantial 20% for table grapes. The analysis also showed that some areas where there is a high density of production are also where ozone was highest – such as in California’s San Joaquin Valley. This highlights potential for even greater regional gains in the future, the researchers say: “A lot of California farmers may not appreciate that air quality standards have had such a benefit on their ability to grow crops.”

The research departs from other agricultural studies that tend to look at the impacts of climate warming on key food crops like wheat and corn. Instead, in this study the researchers opted to focus on high-value perennials like wine grapes, and nut crops, because they make up 38% of California’s agriculture by value – and deserved their own unique assessment of impacts, the researchers believed.

By doing this, they also made a key overall observation: that the influence of ozone on the productivity of these particular crops was actually far greater than temperature increases from climate change. There were some exceptions: under a higher future warming scenario, yields of almonds and walnuts notably go down. But overall, these findings would suggest that we’ve been overlooking the remarkable benefits that stricter pollution controls could bring for farmers.

Results like these could shift thinking around environmental standards, potentially transforming them in the minds of farmers from oppressive policies into practical tools that can actively boost their bottom lines. “Our results suggest that clean air policies have been an unheralded but particularly effective and  practical option to secure perennial crop production,” the researchers write.