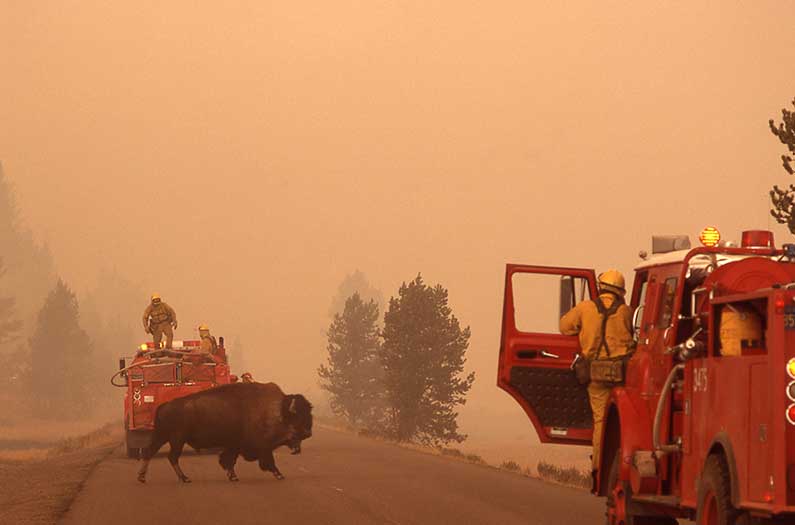 Wildlife affects the severity of wildfires in surprising and subtle ways

When predicting and managing fire outbreaks, we should not overlook animals’ proficiency as ecosystem engineers.
By Cara Giaimo
March 18, 2020

Human fire managers have plenty of strategies to prevent and tamp down dangerous blazes, from controlled burns to bucket drops to fire lines.

But animals have their own bag of tricks. According to a recent review paper in Trends in Ecology and Evolution, plenty of creatures, from tiny isopods to huge elephants, affect the frequency, spread, and severity of wildfires with their behaviors—a factor that many of their human counterparts don’t consider.

As climate change heats up the world, places like Australia, the Amazon, and the western United States are experiencing larger wildfires and longer-lasting fire seasons. While many researchers have looked into how “vegetation dynamics, weather conditions, topography, and ignition patterns” affect the patterns in which fires occur, “effects of animals on fire have been often overlooked,” the authors write.

One way to fight fires is to reduce the amount of fuel available to them. For human firefighters, this means brush removal and pruning. For grazing herbivores, though, it just means eating. As the authors point out, many studies have shown that herbivores, from cattle to vizcacha, can “suppress fuel biomass” in grassy environments.

In forests, where fires thrive on leaf litter, decomposers like isopods keep that fuel from piling up, as do ground-nesting birds and diggers like bandicoots. Some animals even encourage plants to mount chemical defenses, so that their leaves are less likely to break down in the first place.

Human firefighters also create fire lines — total breaks in vegetation meant to stop fire in its tracks. Animals do this too, on many scales. Australian malleefowl make huge leaf piles to nest in, leaving the nearby area relatively bare and potentially reducing flame height. And research has shown that even the small foraging trails made by leafcutter ants can interrupt low-intensity fires in the Amazon understory.

Recommended Reading:
Are gas or electric appliances better for the climate? The answer is a moving target.

Of course, animals can have the opposite effect as well. Insect attacks make trees drier and more vulnerable to fires, and herbivores that prefer to eat only wetter, greener plants can turn their environments into tinderboxes. And some cases are more complicated—while elephants’ large appetites make them great fuel reducers, “they also reduce tree cover, which can convert woodlands to more flammable grass and shrubland communities,” the authors write.

What’s clear is that as we work on predicting and managing fire outbreaks, we should take animals’ proficiency as ecosystem engineers into account. (And maybe we also should take a cue from squirrels, and take a second look at the power grid.)