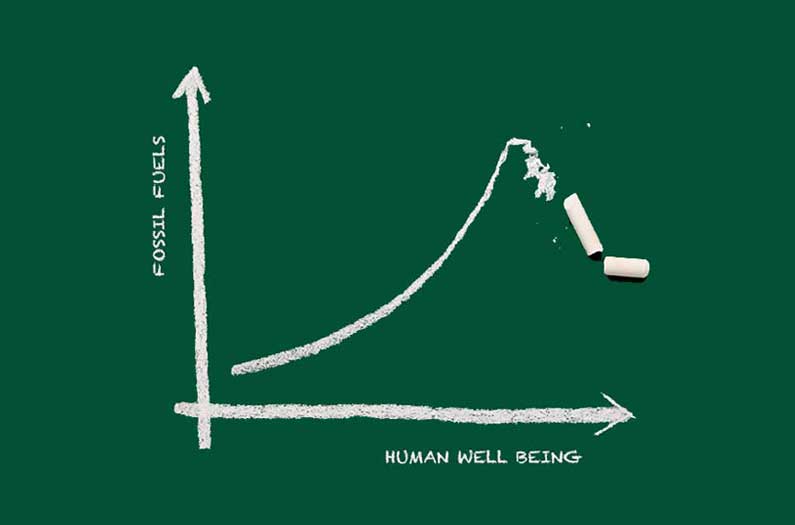 Conventional wisdom holds that rising living standards are fueled by oil. What if that’s wrong?

Researchers found that recent improvements in life expectancy are only weakly coupled to increases in carbon emissions
By Sarah DeWeerdt
March 31, 2020

In recent decades, life has gotten better, more comfortable, and longer for many people around the world. Conventional wisdom holds that these gains in human well-being are underpinned by fossil fuel energy. After all, a country’s energy use tends to be correlated with its inhabitants’ life expectancy at any given point in time.

But this assumption doesn’t hold up to scrutiny, a new analysis indicates. And that, in turn, suggests the hopeful conclusion that decarbonization need not put future gains in well-being at risk.

Researchers in the UK and Germany analyzed data on energy extraction, carbon emissions, economic activity, food supply, residential electricity availability, and life expectancy in 70 countries around the world between 1971 and 2014.

They used a relatively new method called functional dynamic decomposition: a series of mathematical equations to analyze the changing relationships between two variables – such as carbon emissions and life expectancy – and assess whether changes in one drive changes in the other.

The method cannot demonstrate causality, but a lack of association between two variables over time is evidence of lack of causation.

In fact, while some variables are correlated at particular points, one does not drive the other over time, the researchers report in the journal Environmental Research Letters. They call this a “carbon-development paradox.”

The new results “demonstrate that fossil fuels are not, as often imagined or stated, significant contributors to improvements in human development,” the researchers write.

Carbon emissions, primary energy use, and economic activity as measured by market exchange rate income (MER, which depends on international trade) are all “dynamically coupled” over time.

So are economic activity as measured by purchasing power parity (PPP, which indicates how far people’s incomes go within their home country), food supply, residential electricity, and life expectancy.

“Recent improvements in life expectancy are only weakly coupled to increases in primary energy or carbon emissions,” the researchers write. Instead, life expectancy gains are more closely linked growth in real incomes, access to food, and availability of electricity at home.

“Our results directly counter the claims by fossil fuel companies that their products are necessary for well-being,” lead author Julia Steinberger of the University of Leeds said in a statement. “Reducing emissions and primary energy use, while maintaining or enhancing the health of populations, should be possible.”

To do that, governments will need to prioritize people’s access to food, renewable energy, and other goods that are more directly related to well-being—rather than economic growth for its own sake.