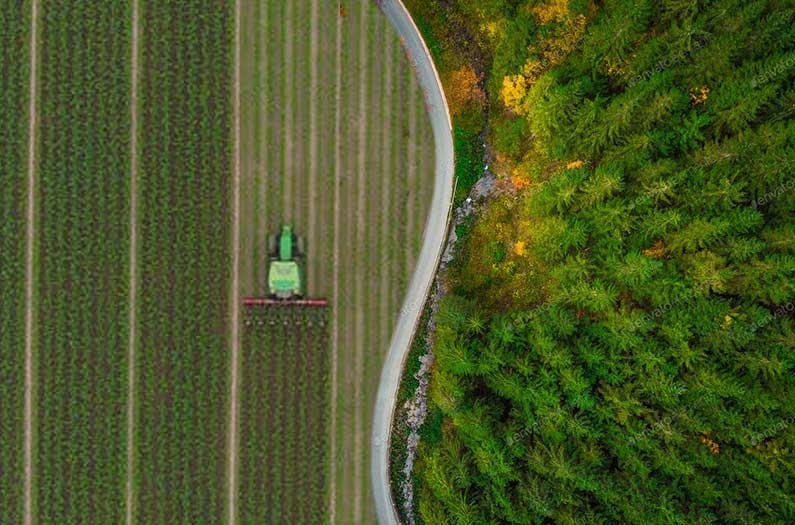 A global crop reshuffle could reduce agricultural land by half

By relocating cropland across the planet, we could halve the amount of land currently used to grow crops, finds a new study. What’s more, if we prioritized biodiversity during this agricultural rearrangement—preserving wildlife hotspots and keeping them untouched by farming—we’d still be on track to reduce our current agricultural area by 40%.

This offers the potential of a win-win for food production and wildlife going into the future, says the new research, published in Nature Sustainability.

For a long time, the dominant thinking has been that in order to feed a growing world population, we need to increase the amount of land devoted to producing food. Yet, countering this, there’s been growing support for a ‘land-sparing’ approach, which sees more land across the earth being protected for biodiversity, to ease off humanity’s most destructive effects. This approach puts a spotlight on agriculture, which makes some of the largest incursions into wild land, with the associated harm to biodiversity.

But the researchers on the new study, led by the International Institute for Applied Systems Analysis in Austria, believe that one majorly-overlooked way to address this problem is to increase the efficiency of global farming.

They found that if we relocated the world’s key crops to regions where they would be most agriculturally productive—so, parts of the planet where temperature and weather will enhance yields—and also made fertilizer application more targeted and intense, we could reduce currently-farmed land by 50%. The rest would be freed up, potentially for efforts like reforestation or other forms of ecological restoration.

This figure emerged from a model that sought only to maximize agricultural land use. So, adopting a more eco-minded approach, the researchers then factored conservation into their equation to find out how substantially that cropland baseline would change if they preserved more wild land. If locating cropland was set around the priority of preserving biodiversity hotspots—meaning that agriculture would additionally have to be reshuffled around wild areas to conserve species—we’d have to farm 62% of the area we currently devote to agriculture, in order to generate the same yields.

That still almost 40% less land than we currently use for farming—a huge area that could to potentially be diverted to other conservation efforts instead. And all this is technically possible while keeping crop yields at the same level.

The research underscores the fact that current crop yields don’t accurately reflect the full potential of the land. So rather than space being the issue, it’s the efficiency and intensity of farming that matters more in terms of meeting future food needs.

The researchers found that crop relocation and intensification also brought other benefits. The reduced area of cultivated land brought down greenhouse gas emissions and water use; fertilizer inputs, on the other hand, remain relatively unchanged, as they were just used more efficiently across the area.

The big caveat to these findings is that of course, advocating for the global restructuring of agriculture is one thing in principle, and entirely another in practice. The researchers didn’t take socioeconomic effects into account—it was beyond the study’s scope—but they do recognize that crops relocation may, for instance, threaten farmers’ livelihoods in some places.

Food distribution under this new agricultural model would also be important to explore: interestingly, the analysis showed that if cropland is shifted into more productive regions, farming under this scenario still provided quantities of food at the continental level that are comparable to what we have now. In fact, across large parts of Africa and Asia there would be gains in supply, while parts of Europe and North America would have less.

In any case, this is a hugely complicated challenge that would require national policies and the coordination of international governments to balance the needs of people and the environment. But the researchers see their study as a starting point, encouraging us to reassess the assumption that destroying natural habitat in order to feed humanity is a tradeoff that we have to make.

At the very least, the findings seem to show “that cropland expansion is not inevitable,” the researchers say.