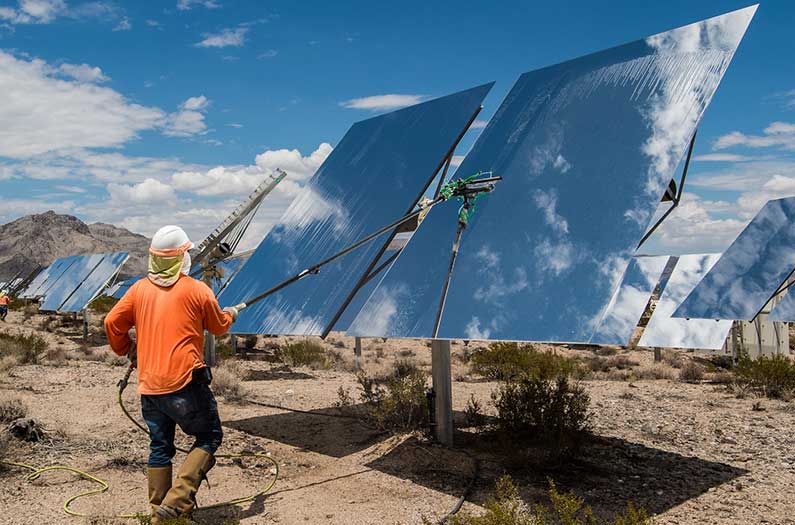 Desert ecosystems are built around two main ingredients: sunlight and water. Solar panels tinker with both.
By Cara Giaimo
April 8, 2020

Most of us think of deserts as empty places. This assumption has leaked into our language and our cocktail party conversation. It also influences our infrastructure planning: because deserts have sparse shade and low human density, we like to put solar panels there.

In reality, though, these ecosystems are full of life. And the pressures of low-water existence mean that many desert-dwellers are unique, not found outside of their particular habitats. What happens when we panel over their homes?

For a recent study in Ecosphere, researchers investigated how solar panels influence plant communities in parts of the American west’s Mojave Desert, which already shines with hundreds of thousands of solar mirrors and panels and is slated for many more. They found that in some cases, the presence of panels increased species richness and abundance, while in others it had the opposite effect, underscoring the need to think about these decisions carefully.

Desert ecosystems are built around two main ingredients: sunlight and water. Solar panels tinker with the placement and availability of both, “potentially altering carbon cycling, soil water retention, erosion, and ecosystem energy balances,” as well as temperature and moisture and shade gradients, the authors write.

To learn how that plays out for plants, the team set up experimental solar panels in two different habitat types. The first, gravelly bajada, is made up of loamy sand and home to a number of shrubs, among other plants. The second, caliche pan, is characterized by the hard mineral layer that overlays its soil, and its inhabitants include two rare plant species, the Mojave spineflower and the Barstow wooly sunflower.

For six years, the researchers regularly visited their panels to measure soil moisture and temperature and light availability, and to count the plants in and around the panels. They found that overall, panels “intercepted sunlight, reduced soil temperature, and diverted rainfall,” the write.

For plants in the caliche pan habitat, “shade effects were almost uniformly positive,” the authors write. The solar panels intercepted some of the wind and sunlight that typically make dry soil even more parched, and they increased humidity and moisture retention. Some years, the areas under the panels had more rare wooly sunflowers than the control areas. They also had more species and more plants overall—although some of these plants were introduced species, so their increase wasn’t necessarily welcome.

In the gravelly bajada habitat, results were more mixed. Overall, the areas under panels tended to have fewer plants than those that were exposed to the sun. The authors think this is because the solar panels blocked out too much rain. The other measures were about even.

Decisions about whether to place infrastructure in a wild place will always be complex. Plants aren’t the only organisms affected by solar panels: existing infrastructure in the Mojave has already negatively affected birds, and a new project will temporarily displace threatened tortoises. If, as the authors summarize, “the ecological consequences of solar development can vary over space and time,” it’s helpful to know what those consequences might look like.

Most of all, the study underscores that it’s vital to be careful with the desert—to think of it not as a big empty warehouse, but an occupied living space, and to plan our renovations accordingly.