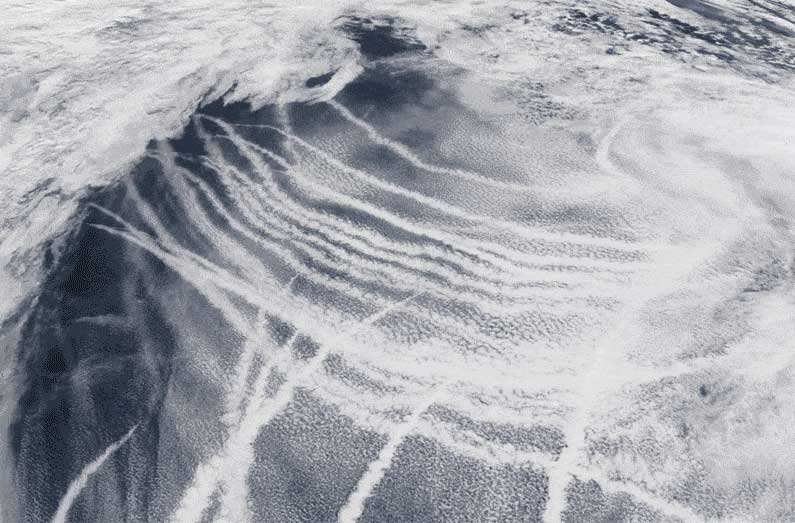 Cloud tracks from ships could be temporarily bringing down global temperatures

Tens of thousands of cargo ships criss-cross the oceans each day, creating trails of puffy white clouds in the sky that look much like the contrails from jet planes. Now, a study published in AGU Advances finds that these bright clouds formed by ships reflect solar energy and help to bring down global temperatures.

The results hint that the geoengineering strategy known as marine cloud brightening, which involves spraying salt particles to make clouds more reflective in order to reflect heat back into space, might be effective.

Ship clouds, or tracks as they are known, form when water vapor in the air condenses on tiny pollutant particles in the exhaust from ship engines. They can remain in the air for hours, and climate models have shown that these clouds can have an unusually large effect on the climate.

“Mysteriously, however, previous attempts to measure ship tracks globally found very small effects,” write University of Washington researchers in the new paper. The team is the first to measure the effect of clouds on climate over years.

They looked at satellite data between 2003 and 2015 for shipping routes between South Africa and Europe during spring, the cloudiest season. And they focused on an area where the wind blows along the shipping lane, keeping pollution concentrated in that small area.

Using the satellite instrument data, they analyzed cloud properties and the amount of reflected sunlight above the atmosphere. They compared the cloud properties from the shipping routes with those from natural clouds in nearby unpolluted areas. Calculations showed that ship-induced clouds blocked 2 Watts of solar energy from reaching each square meter of ocean surface in and near the shipping lane.

But the researchers didn’t stop there. They extrapolated the data to estimate how much solar energy would be blocked due to brighter clouds caused by all industrial pollution. That number came out to 1 W/m2 of solar energy, which is a third of the around 3 W/m2 trapped by the greenhouse gases produced by industrial sources.

The study does not suggest that we should be implementing marine cloud brightening, said Michael S. Diamond, UW doctoral student in atmospheric sciences, in a press release. “There’s a lot more research that needs to go into that,” he says. “It does tell us that these effects are possible, and on a more cautionary note, that these effects might be difficult to confidently detect.”