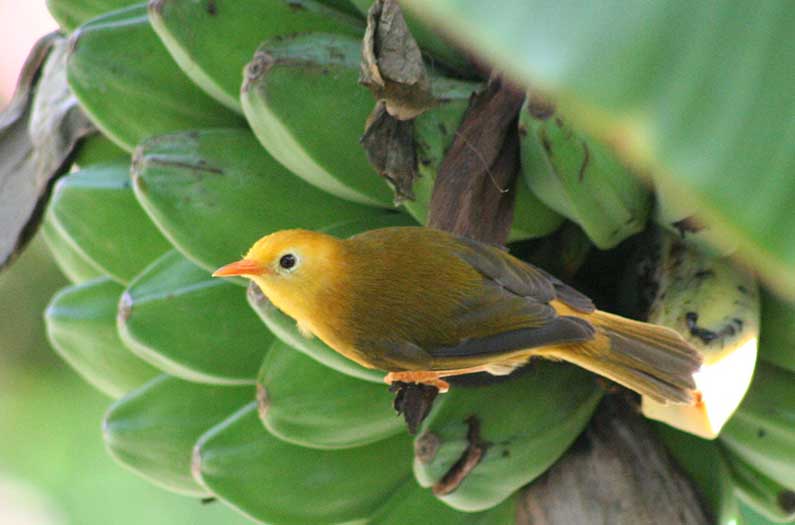 In a long-term study, researchers demonstrate how farms can double as wildlife refuges—and benefit farmers too
By Emma Bryce
April 10, 2020

Farms that buck the monoculture trend and grow a diversity of crops harbor more endangered bird species, and can also provide a refuge for these species against climate extremes.

That’s the recent discovery of a Nature study, in which researchers took an unusually long view, gathering together almost 20 years of data in Costa Rica, to assess the benefits to wildlife of diversified farms—where for example, crops like coffee are interwoven with banana palms, and whose edges often incorporate strips of wild forest—compared to swathes of monoculture.

The answer is that these more diverse patchworks of farmland provide a level of stability and security to wildlife that, while clearly not the same, is a close second to natural forests. The researchers found that over the two decades, the diversified farms had been able to support a more stable population of bird species, whilst more intensively-farmed monocrops by comparison showed shifts and declines in species richness over that time.

This was especially true for rare and endangered birds: diversely-cropped farms were found to contain 59% of the endemic and endangered species that are present in wild forests. In intensively-farmed areas of monocrop, however, that figure was only 39%—and the number is declining.

Providing reliable habitat wasn’t the only benefit of diversified farms. The researchers also found that despite declines in rainfall and increases in temperature over the 18-year period covered in the study, these drought-like periods had little effect on the bird communities that lived on more diversified farms. In single-crop landscapes, however, a very different picture emerged, with drought seeming to drive large changes in the makeup of bird communities, causing some to migrate away and leaving behind an altogether less diverse community of birds.

This suggests that during periods of extreme weather, birds who inhabit the richer patchwork of vegetation on diversely-cropped farms are somewhat insulated from these effects. That bodes well for the role of diversified farms as wildlife refuges, under widespread climate change. These benefits might come down to the different types of vegetation on diversified farms, which create shady and cooling canopies for birds—as in the case with coffee that’s intercropped with banana palms, which provide a light canopy reminiscent of natural forests.

As well as that, the greater diversity of crops on farms means there’s a wider spectrum of foods—like nectar, seeds, and fruit—to sustain birds of different species. (Under intensified agricultural plots, the researchers documented a 28% decline in nectar-consuming birds, suggesting that food wasn’t available for these birds.) Plus, diversified farms are more likely to be set within more natural forested surrounds—which can also further buffer against extremes—as opposed to monoculture, which typically involves the conversion of huge stretches of the landscape into just one crop.

To make their findings, the researchers looked at four environs in Costa Rica—from lowland to premontane forest—and then pinpointed three types of habitat to analyse within each: monoculture crops like sugarcane and pineapple plantations with little or no other types of vegetation nearby; diversified agriculture which included more than one crop type, and was usually within 500 meters of remnant forest; and untouched natural forest. The data they gathered spanned the wet and dry seasons, and was drawn from bird surveys taken over the two decades—incorporating almost 300,000 sightings—as well as daily measures of precipitation and temperature in each locale.

Birds are helpful yardsticks of environmental change—and so these findings could have relevance for other wildlife, the researchers say. “Farms that are good for birds are also good for other species. We can use birds as natural guides to help us design better agricultural systems.”

Yet, while wildlife was the study’s focus, the researchers are keen to emphasize that diversified farms provide benefits for people, too. Growing more than one crop is also a way for farmers to diversify their incomes, and can insulate them against extreme weather events like intense drought, as well as diseases, which tend to rip through monoculture plots so much more easily.

Agriculture can never replace nature: as the study showed, nothing can compete with the richness and biodiversity encountered within complex, virgin forest. But with the reality of shrinking protected areas around the world, in many cases farmland becomes the next best thing for beleaguered wildlife. Facing these difficult dilemmas, the way we farm could make a world of difference for wildlife—and ultimately, for us, the researchers suggest. “Local farming practices really matter in protecting biodiversity and building climate resilience.”