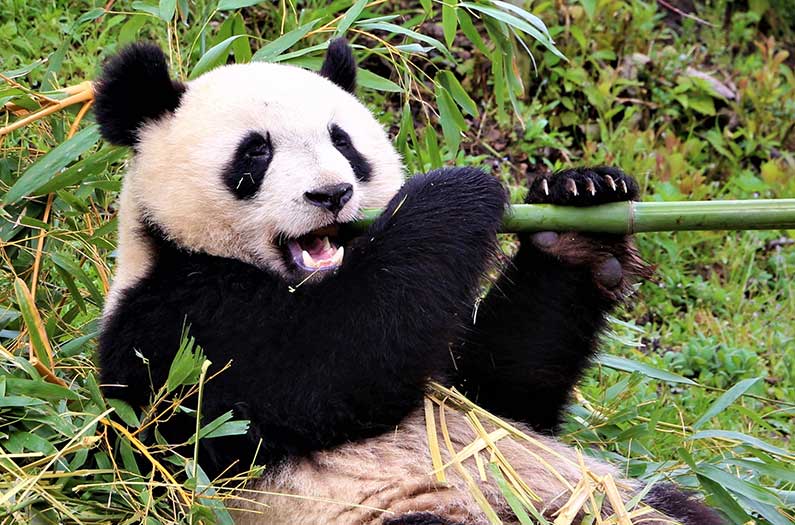 The surprising reasons why no one trophy hunts for pandas

Colonial history, diplomatic value, and a cute baby panda named Su-Lin have kept the beloved species out of the crosshairs.
By Cara Giaimo
April 22, 2020

But unlike all three of those species, pandas are not hunted for sport. Indeed, “if you walked into someone’s trophy room and you saw a panda, you’d look at the person who did it and be like, ‘Are you kidding me?'” said Robert Montgomery, a wildlife ecologist at Michigan State University.

This isn’t a given—a century ago, the species seemed poised to play a different role. In a new paper in Conservation Biology, Dr. Montgomery and his coauthors investigate how “a combination of factors, including the species’ iconic status, charisma, rarity, valuation, and endemism” have kept the panda out of the crosshairs.

In 1929, two of Teddy Roosevelt’s sons, Theodore Jr. and Kermit, killed a panda after a months-long, well-publicized hunt. (They brought his body back to Chicago’s Field Museum, where it is still on display.) The Roosevelts’ accounts of the hunt emphasized particular aspects of the panda: how large it was, and how difficult to find. They called the animal “the Golden Fleece of our trip.”

But then things shifted. The next person to successfully bring a panda out of China was Ruth Harkness, a dress designer from Manhattan who traveled to Sichuan in 1936 to fulfill a dream of her late husband’s. With the help of a number of local people, Harkness captured a live cub in the mountains, and named him Su-Lin.

The press followed Su-Lin everywhere he went. When he got to San Francisco, he was greeted by “scores of reporters, cameramen and sound-reel technicians,” the Examiner wrote. Upon his arrival in New York, so many flashbulbs went off that the baby panda — who traveled in a wicker hamper — hid his eyes. All this reporting spurred an outpour of American public interest, which the New York Times dubbed “panda-monium.” Tens of thousands of people went to see him at his eventual home, the Brookfield Zoo in Chicago.

If the nameless panda hunted by the Roosevelts was known mostly for his size and elusiveness, Su-Lin brought some of the species’ other characteristics to the fore: their gentleness, charisma, and curiosity. Newspapers published photos of the infant drinking from a baby bottle and teething on a camping chair. Upon meeting him in person, Dean Sage, who had previously killed two pandas for the American Museum of Natural History, remarked that he would “never shoot another panda.”

Su-Lin died of pneumonia in 1938. But over the following decades, other zoo pandas would continue to captivate the public. Meanwhile, entities from breakfast cereal companies to conservation organizations would simultaneously capitalize on and reinforce the panda’s reputation by using the animal as a symbol—just think of the WWF’s famous black-and-white logo.

In this way, “the context… in which the species was popularized in the West” made the panda widely beloved, the authors write. At this point, they surmise, “any proposal to open up trophy hunting for the giant panda, even in the name of conservation, would be met by unparalleled levels of public fury.”

The authors also point out a few other key factors that have helped the panda escape the hunt. One is the fact that it is unique to China, which helps lend it diplomatic value: Chinese leaders often loan pandas to other countries as a sign of goodwill.

Another is that China has always been autonomous, and in control of its own natural resources. Much of the trophy hunting in African countries, for example, has its roots in colonization—as does a lot of the economic pressure that spurs those countries to keep the controversial practice around as a revenue source.

“A compelling argument could be made that had giant pandas evolved on the European, North American, or African continent, the species might be trophy hunted today,” the authors write. Imagining this is a crash course in how species’ reputations are constructed, said Dr. Montgomery: If it makes you queasy, that likely has less to do with any differences between pandas and other animals, and more to do with “how this species was popularized in the West.”

Right next to the panda in that hypothetical trophy room, he added, “would be a lion, would be a leopard, right? Or would be a brown bear. And it’s like—what is the difference?”