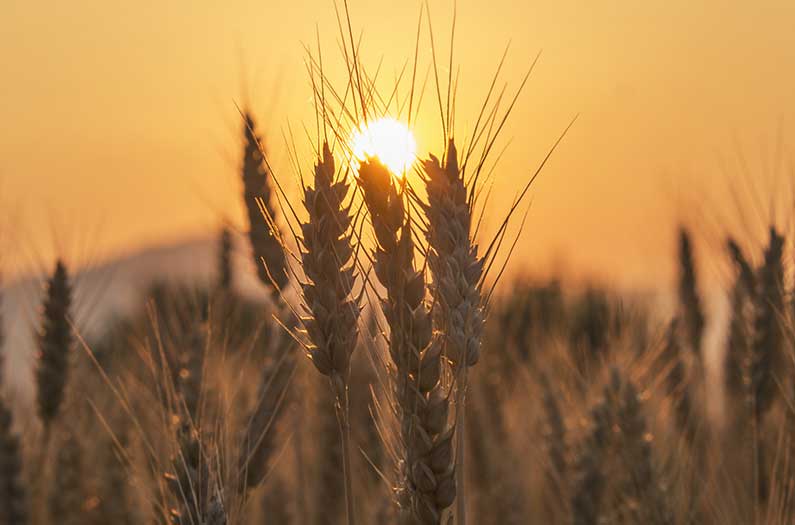 Researchers find a way to control the on-off switch for photosynthesis - and keep plants productive, even under high heat.
By Emma Bryce
May 8, 2020

By tweaking the molecular machinery of photosynthesis in wheat plants, researchers have found a way to build heat-tolerant crops that could grow optimally at 35°C.

That’s more than 10°C higher than the temperature at which wheat currently grows best—so this discovery could potentially set up this globally important staple crop to succeed under climate change.

The findings—which come from Lancaster University in the UK —hinge on the activities of Rubisco, an enzyme in plants whose job is to capture carbon dioxide from the air, and turn it into energy as part of photosynthesis. Rubisco’s activities are governed by Rubisco activase, or Rca, a type of protein that tells Rubisco when to turn on and off. That’s determined by sunlight, a cue that Rca uses to tell Rubisco when to ramp up and start capturing CO2.

Yet, temperature places a big limitation on this process, and consequently on the growth and yields of wheat. That’s because, of the three types of Rcas that occur in in wheat plants, the variety that occurs most abundantly – known as 2β Rca—is incredibly successful at activating Rubisco, but actually becomes less efficient at temperatures above 25°C. That’s not the case for all types of Rcas: in fact, a second variety that also occurs in wheat, called 1β Rca, while being much less successful at activating Rubisco, is far better at functioning under high temperatures.

To find out why, the researchers investigated the amino acid structure that makes up the 1β Rca variety, and managed to identify a single amino acid which seemed to be equipping 1β Rca to continue functioning under hotter conditions.

To test out its efficacy, they then substituted that hardier amino acid into the abundant 2β Rca, and in doing so, found that they could successfully combine the best of both Rca varieties: the newly-engineered 2β Rca not only maintained its former capacity to activate Rubisco, but could also work at higher temperatures than before—increasing its optimal functioning temperature from 30°C to 35°C.

The implications are that instead of stopping at 30°C, the 2β Rca can continue activating Rubisco at higher temperatures. And that means that wheat would be able to keep photosynthesizing under conditions that, formerly, would have been too stressful for it to do so. “The results suggest that this single amino acid substitution acts as a thermal and regulatory switch in wheat Rca,” the researchers write.

If they manage to breed wheat plants that contain this upgraded Rca, there could be important consequences for farmers and food security. Bread wheat is one of the world’s most widely consumed crops. It currently covers 15% of the globally-harvested agricultural area, and provides 20% of the calories that humans consume. So, finding ways to ensure its continued production is important not only economically for farmers, but also in terms of providing nutritious food.

And since rising temperatures are already starting to affect wheat yields, this isn’t just a far-off concern for the future, but a current reality.

Next, the researchers—whose work forms part of Realizing Increased Photosynthetic Efficiency (RIPE), a global initiative to boost global crop production—will be looking at how their findings could be used to enhance other nutritionally-important crops, like soybeans and cowpeas, in addition to wheat. They believe that their molecular discovery “could help us close the gap between yield potential and the reality for farmers who depend on these crops for their sustenance and livelihoods.”