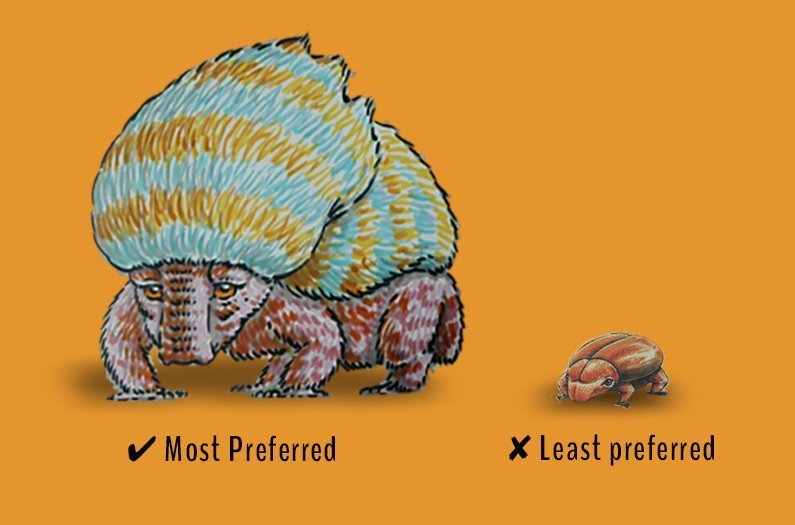 The imaginary menagerie helped tease out why some species are more popular than others.
By Cara Giaimo
May 6, 2020

Look carefully at the creature on the left. Do you think he’s beautiful? Are you impressed by his large size and his multi-colored fur? Would you donate money to protect him, and the other members of his species, if given the opportunity?

If you answered “yes” to any of the above questions, you’re not alone. For a recent study in Conservation Letters, researchers sought to figure out what makes people prefer some animals over others by making up imaginary ones—including our fake fuzzy friend, who, a survey showed, was the most likely to elicit donations.

He and the study’s other high-scoring fake beasts help reveal what aesthetic traits make animals more attractive to us—and might aid conservationists in figuring out how to drum up support for them, as well as less flashy critters.

Sarah Papworth, an author of the new study, usually works with monkeys and other primates. “They’re popular animals,” she said, and often serve as flagship species, centered by attention- and fundraising efforts. “I got interested in why we like these particular animals, with the aim of hopefully trying to identify ways that the animals that are typically less popular could be promoted in a way that would also help their conservation.”

A number of studies have looked into what makes such animals so beloved, citing traits like large body size, fuzziness, and forward-facing eyes. But many species that fit this bill, like tigers and panda bears, are also well-known. Trying to figure out whether they are famous because they are attractive, or attractive because they are famous, is like untangling a “self-perpetuating circle,” Dr. Papworth said. She decided to try investigating with “animals” that are nonexistant—and thus reputation-free.

To create their imaginary menagerie, the researchers first listed a number of the aesthetic traits that had been investigated by previous studies, including size, number of colors, and eye direction. They then teamed up with a mural artist, Rory McCann, and remixed these traits to form hundreds of different creatures. For example, one animal might be small and tricolor, with smooth skin and forward-facing eyes. Another might be large, fuzzy, and all one color, with side-facing eyes.

Once they had their creatures, the researchers presented them in pairs to members of the public, and asked them which they found more attractive. They also asked which they preferred to conserve. After they had run this study hundreds of times, an algorithm “picked out the characteristics that are most popular,” said Dr. Papworth.

The winningest trait? Lots of colors, they found: The multicolored fake animals were “about 50% more popular than single-colored ones,” said Dr. Papworth. Larger animals were also more popular, as were cooler tones, like blue and purple. And although other research has found them to be important, eye direction and furriness did not make a big difference in this study.

These preferences carried over into the real world, the researchers found: when given a chance to donate to an actual conservation organization, survey participants were more likely to choose ones that helped large and/or multicolored animals, like tigers and bees.

Small, monochrome species—and those who love them—need not give up hope. Beauty is subjective, and it also isn’t everything. Dr. Papworth is wrapping up a similar study that gives the imaginary animals broader traits, like ecosystem roles and population sizes, to see if that affects how people feel about them.

Sometimes, it’s just about framing: Another recent study found that funny memes about the proboscis monkey—once rated the ugliest monkey—help encourage enthusiasm about its conservation. In the future, Dr. Papworth hopes to investigate the importance of animal names (“studies with real animals suggest that cute or fun names make people like species better,” she said) and to expand her purview to include plants and “mini-beasts,” like insects.

Dr. Papworth hopes that the findings from these and other studies will help conservationists figure out how to show species in their best—or at least most lucrative—light. “All is not lost for the “ugly” animals,” she said. “But maybe they need a little bit of extra help to get people’s attention.”

In the meantime, spare a thought for the winner of this survey: so handsome, but already extinct, because he never really existed.