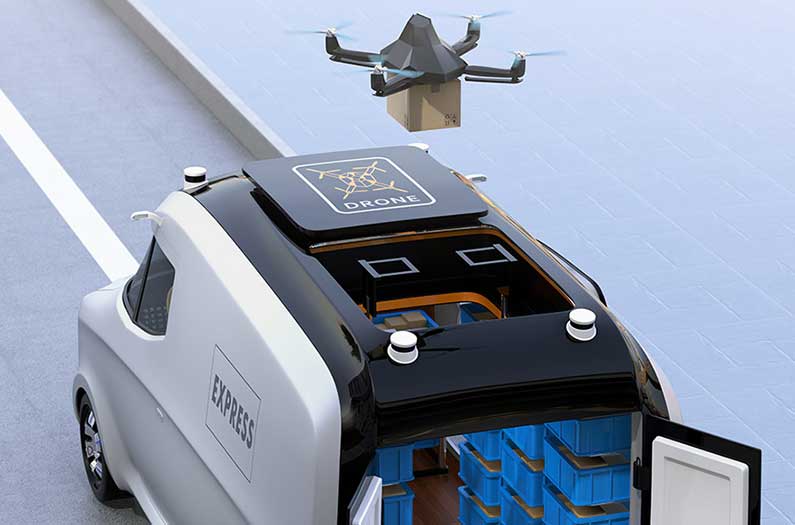 Drones could use more energy than vans for urban deliveries

Vans loaded with dozens of packages driving short distances would be more energy-efficient than drones. And electric vans would be best.
By Prachi Patel
May 7, 2020

But new research suggests a rethink. A study published in Transportation Research Part D: Transport and Environment says that drones might actually end up using more energy than diesel vans for deliveries around a city. And they would use around 10 times as much energy as electric vans.

As online shopping surges and retailers promise faster delivery, companies face the challenge of quickly and cheaply transporting packages the last few miles that from warehouses to customers. Many large companies, such as Amazon, DHL, and Google have been experimenting with drones for deliveries. Past studies have shown that drone use can reduce greenhouse gas emissions compared to ground vehicles if deployed correctly.

But drones are pretty energy-inefficient aircraft. They constantly run their batteries to stay aloft since they do not have wings to glide. Plus, they can only carry one parcel at a time.

Thomas Kirschstein of Martin Luther Universitat modeled the energy demand of drones versus electric and diesel trucks. He assumed a stationary parcel delivery system where the delivery vehicle serves customers from a central depot. And he ran the simulations for Berlin as well as surrounding rural areas.

The calculations show that drones require the most energy in densely populated urban areas, where trucks have to travel shorter distances with several drop-offs. Electric vans were the most energy-efficient delivery option in cities. Diesel vans used five times more energy, while drones used 10 times as much.

Of course, much depends on things like the number of drop-offs and weight of the parcels. He assumes, for instance, that the vans are carrying 100 parcels each, and that all parcels weigh 2.5 kg (5.5 lb), among other things.

Drones start to become more competitive with energy use in rural settings. For instance, when customers are up to 8 km away from the delivery center, drones are more efficient for a single delivery than diesel vans.

“The results indicate that switching to a solely drone-based parcel delivery system is not worthwhile from an energetic perspective in most scenarios,” the researchers write in the paper.