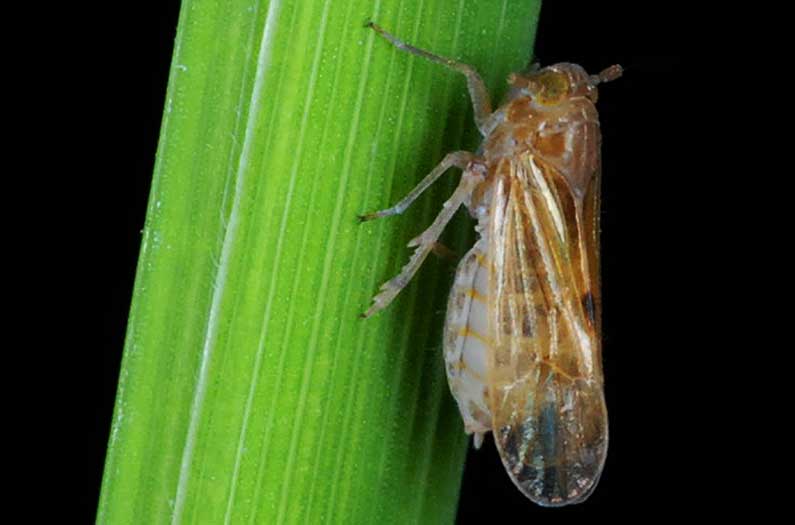 “Plant strengtheners” offer an alternative to applying environmentally-damaging chemicals
By Emma Bryce
May 29, 2020

Researchers have found a way to make cereal crops innately resilient to certain pests, thus boosting their yields. Their recent discovery could set us on a path to reducing the application of pesticides that harm wildlife and cause pollution.

The findings, from a multinational team of Chinese, Swiss, and British researchers, revolve around an ingredient called 4-fluorophenoxyacetic (4-FPA), a compound that can be synthesized and applied to plants. The researchers discovered that when 4-FPA was dissolved in a solution and sprayed over rice plants, the treated crops were attacked much less by sap-sucking insects called planthoppers—a major cause of yield losses in cereal crops—than the non-treated plants were.

In fact, their results showed that the treatment reduced the population density of planthoppers by up to 68%. What’s more, treated rice plants, protected from these pests, had an increased number of seeds, and generated higher yields per plant, compared to non-treated crops. It also turned out that there were fewer planthopper eggs deposited on treated plants—probably because the insects, being unable to feed as much on those crops as they usually would, didn’t have the resources to produce as many eggs.

The researchers started out with at least a hunch that 4-FPA might have these benefits. That’s because it falls into a class of agricultural products known as ‘plant strengtheners’, which variously incorporate hormones, bacteria, acids, and other ingredients that, when applied to plants, seem to trigger an internal defense response that helps them rally against pests. Until now, however, relatively little has been known about how successfully these ingredients can protect plants and, crucially, whether they actually increase yields. This is especially important for staple cereal crops like rice, a foundation of food security for millions around the world.

Researchers still don’t fully understand the mechanism that underlies plant strengtheners, though it’s assumed that they all work by altering plants’ defense signaling pathways in some way, inducing a response that helps them fight insects off. In the case of 4-FPA, however, the researchers showed that it seems to be doing something different.

In fact, they found that when taken up by the plant, the 4-FPA is converted into a metabolite which, following a series of steps, triggers the production of a compound known as flavonoid polymer in the plant, which it then deposits into its cells. Specifically, the researchers found that these flavonoid compounds were laid down in greater numbers within parenchyma cells of treated plants, making the tissue denser.

Since parenchyma cells are those that line the fleshier parts of plants that sap-sucking insects target, this makes the plants tougher to penetrate—creating a barrier that stops the insects from slurping up sap. And thus, they’re not able to do as much damage.

Notably, this would mean that it’s not the acid itself, but rather its effect on the structure of the plant, that actually deters insects. That’s important, because it suggests that applications of 4-FPA target the particular pests that attack rice plants—instead of indiscriminately harming other insects and wildlife that occur on and around crops, which is what regular pesticides do. “The major environmental benefit of applying 4-FPA is its low toxicity, as it does not kill insect pests directly,” says Yonggen Lou, an entomologist at Zhejiang University in China, and author on the study. Because of that “it is safe for the environment.”

In fact, the study found that applications of 4-FPA had no effect on spiders that naturally prey on rice pests. And, in tests carried out on planthoppers in the study, there was no evidence of toxic effects on their bodies—suggesting that their numbers declined not because of physical damage, but because there simply wasn’t enough food.

The benefits stretch beyond rice, too. In additional experiments, the researchers found that applications of 4-FPA on barley and wheat plants led to similar protections, reducing survival rates of local pests—not just planthoppers, but other sap-sucking insects like aphids, too. This suggests that the underlying mechanism of 4-FPA might be broadly applicable to all sorts of crops. So, if it one day reaches the field, this potentially diverse application could help bring down the huge toll of pesticides on our planet.

The discovery hints at something else too: that we could be overlooking many more creative and environmentally-sound ways of solving our current agricultural problems, than the approaches we currently take. Next up, the researchers aim to put their findings to work to develop even “safer and greener plant strengtheners,” Lou says.