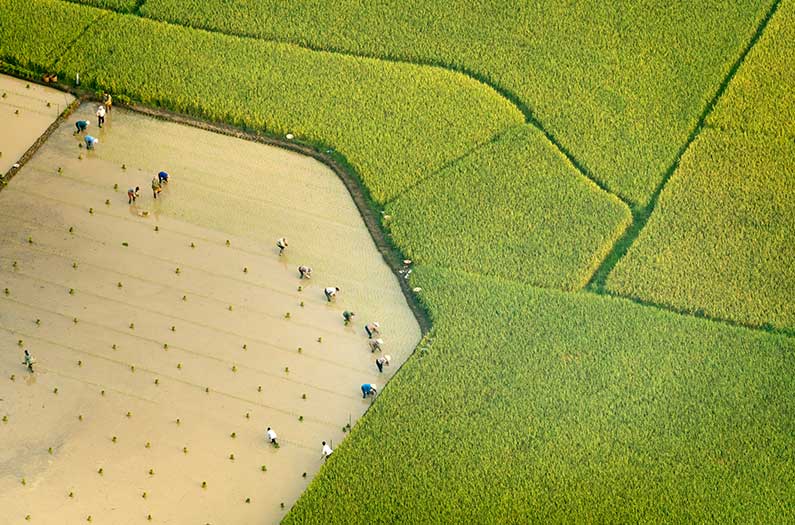 Injecting bacteria into rice paddies could reduce methane by over 90%

A recently discovered microbe could replace artificial forms of methane control in rice farming.
By Emma Bryce
May 1, 2020

Rice paddies provide a source of staple food for millions worldwide. But this comes at a huge cost to the environment: rice farming contributes 11% of anthropogenic methane to the atmosphere, a gas several times more potent than carbon dioxide.

However, a group of scientists think that a recently-discovered bacteria might hold the solution: they found that inoculating soil with these microbes caused a striking decline in methane of over 90%. That could help make a dent in harmful greenhouse gas emissions, if the results carry through to field trials.

The reason rice paddies belch so much methane is the low-oxygen, dense, and waterlogged soils in which the plants grow provide the perfect breeding ground for methanogens, the microbes that produce methane gas. But the team of Danish and German researchers on the study wondered whether cable bacteria (a sulfate) producing microbe that was first discovered a few years ago off the coast of Denmark—might be able to bring down these methane levels, by generating high levels of sulfates in the soil.

Their thinking was that when sulfate levels increase in soil, fleets of microbes swarm in to consume them, and these microbes happen to compete for the same resources that methanogens do. This depletes the resources available for methanogens to grow and spread, and so indirectly brings down their population in the soil.

To test their idea, the researchers grew rice plants under experimental conditions in pots of soil—half of which had no cable bacteria in the soil, and half of which were inoculated with the bacteria. Through the process of oxidation, cable bacteria transform the compound sulfide into sulfate, and so the researchers were hoping that this would accumulate over the 11 weeks of the experiment to zap the number of methanogens in the soil. After this period, they measured sulfate concentrations, the abundance of cable bacteria in the soil, and methane output from each of the pots.

This revealed that in the bacteria-treated pots, methane output was 93% lower than in the regular untreated pots. The treated pots also had five times the amount of sulfates—suggesting that cable bacteria were indeed behind the lower methane output.

The study also underscored the uniqueness of cable bacteria in the microbial world. These bacteria—which, at one centimeter, are unusually lengthy—work by channelling electrons, creating a mini electrical current along their filaments (which explains their name). This is the process by which they oxidize sulfides at the top of the filament, which leads to the creation of sulfates further down the filament length, in deeper soils. This production process causes downward migration of sulfates, which minimizes their loss in the water column, the researchers think—thus boosting sulfate density in soil, and outcompeting methanogens.

The researchers also found that there was no difference between plants in their above-ground biomass, suggesting that having cable bacteria in the soil doesn’t compromise growth.

It’s actually common practice for farmers to add sulfates—in the form of ammonium sulfate or gypsum—to rice paddies in order to keep methane production down. But the effects don’t last for very long, meaning sulfates have to be frequently reapplied—potentially leading to unhealthy build-ups in the soil. But with bacteria in the soil constantly recycling sulfides into sulfates, they can provide this service naturally, over extended periods of time, the researchers surmise.

However, these findings were the product of laboratory experiments, so the next big question is whether they translate to substantial methane savings in the field. The researchers are hopeful: “Promoting cable bacteria in rice fields by enrichment or sensible management may thus become a strategy to reduce anthropogenic methane emissions.”