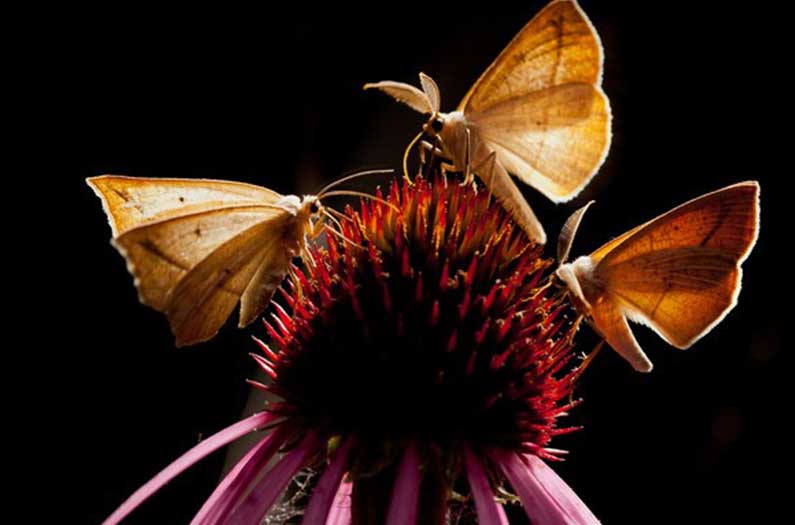 Moths may even help counterbalance pollination gaps left in the wake of other insect declines
By Cara Giaimo
May 13, 2020

The whole world is worried about bees. And well they should be: 75% of the world’s crops depend on them, as do innumerable wild fruits and flowers.

But as a recent study in Biology Letters points out, pollen transport doesn’t stop when the sun sets. A vital, overlooked group is on the night shift: moths.

For the study, the researchers focused on insect activity at the edges of nine pond-adjacent agricultural fields in Norfolk, England. (The changing moisture gradient between fields and ponds makes for “highly diverse vegetation,” they explain.)

Over two years’ worth of growing seasons, they regularly surveyed each field, noting plants and pollinators. They also caught hundreds of moths and sampled pollen from their thoraxes and proboscises, to figure out where they had been. Although most studies focus on the tongue-like proboscis, moths actually transfer a lot of pollen on the fronts of their bodies—more than half, according to this study.

By combining observations with pollen analysis, they then made a chart of which plants had been visited by which pollinators. (It is important to note that pollen transport doesn’t necessarily imply pollination, although the two are likely associated.)

The authors found that what they call the “nocturnal pollen transport network” likely contains over 100 moth species, as well as dozens of plant types, ranging from clovers to blackberries. For seven of these plants, “no visitation from diurnal pollinators was observed,” they write. (The plants in question do have a certain nighttime energy—they include garlic mustard, marsh woundwort, and cursed buttercup.)

This is most likely just a sliver of the after-dark scene. Other studies have found that the plants listed above are also sometimes pollinated by diurnal insects. By the same token, it’s possible that moths are doing even more than this study showed. Perhaps, the authors write, they could even “partly counterbalance pollination gaps” caused by declines in other insect populations.

That is, of course, if they start enjoying the same attention—and eliciting the same concern—as their daytime counterparts. As part of the study, the researchers also tallied publications about different types of pollinators, and found that bee studies outnumber moth studies by a factor of 22. It’s time to start being more inclusive, the authors say, lest we be left in the dark.