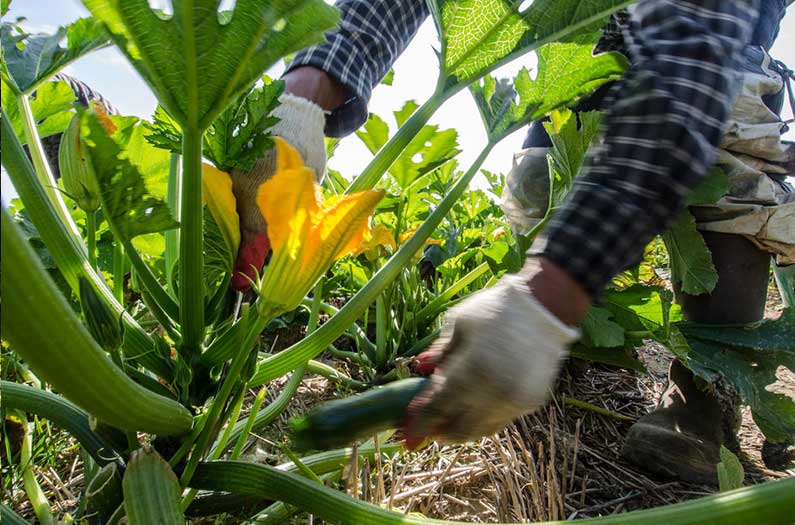 Most climate and agriculture research has focused on crops, not the people who pick them

At 2 degrees warming, the entire growing season will be considered unsafe for agricultural work in some places
By Sarah DeWeerdt
May 5, 2020

The coronavirus pandemic has highlighted the importance of people who grow, pick, and process food as essential workers. These agricultural workers will also be on the front lines of climate change, a new study makes clear.

In principle, this isn’t so surprising – agricultural workers labor outside, and temperatures are rising. But until now, most research on climate change and agriculture has focused on crops, not the people who pick them.

Under current agricultural labor practices, healthy workers can tolerate regular exposure to a heat index (which includes the effect of both temperature and humidity) up to 83.4 °F without suffering heat stress.

Between 1979 and 2013, counties with at least 500 agricultural workers have seen heat extremes ranging from 78.1 to 109.2 °F at some point during the May-through-August growing season. The average worker has experienced temperatures above the heat stress threshold on 21 days each growing season; high numbers of unsafe days have occurred mainly in southern California and the Southeast.

With 2 °C of global average warming, which is expected around mid-century even if carbon emissions peak within the next two decades, “The average U.S. crop worker will face heat extremes of 101.4 °F,” the researchers write in the journal Environmental Research Letters.

At that point, the average worker will experience 39 days of unsafe heat each year. Regions with large numbers of unsafe days will include more northerly areas such as New Jersey and eastern Washington. In the Southeast, “the entirety of the growing season will be considered unsafe for agricultural work with present-day work practices,” the researchers write.

With 4 °C of global average warming, which is expected by the end of the century if high carbon emissions continue, the average worker will experience unsafe temperatures on 62 out of the 153 growing season days. A majority of crop workers will at some point each year experience a heat index above 115 °F, which the U.S. Occupational Safety and Health Administration defines as “very high/extreme” risk.

The most effective single measure would be wearing more breathable clothing. This is challenging to accomplish, because agricultural workers must often wear personal protective equipment (PPE) to protect against dust, pesticides, and so on. So this would require developing some new material that can protect against these hazards but also let out body heat. Still, it’s a hopeful finding in that it suggests technology could actually provide a solution.

And that’s the problem. Agricultural workers are already 20 times more likely to die from heat stress than the civilian labor force as a whole. Many U.S. crop workers have little education and limited English language skills, and a large fraction are undocumented. It’s possible to reduce the risks to their health even today, but that would require a pretty thorough restructuring of working conditions – and an equally thorough reworking of how the rest of us value their labor and their lives.