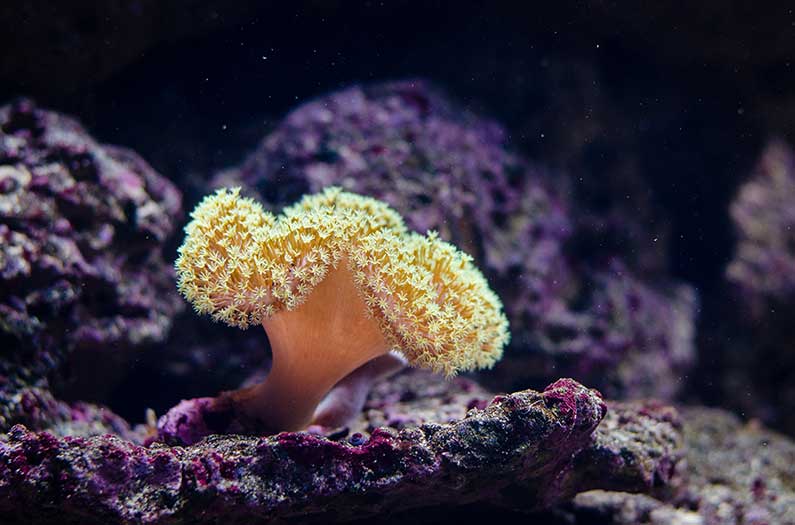 Over the course of 120 generations, researchers bred algae to be more heat-tolerant—a quality it then passed to its coral hosts.
By Cara Giaimo
May 20, 2020

When the water around a coral reef gets too warm, the whole community starts to fall apart. First, coral polyps evict their symbiotic partners: the algae that live inside of them, and help provide them with energy. Without the algae’s help, the coral starts to starve and die. Animals that normally rely on the reef—for shelter, food, or a place to breed—pick up and move. As the reef bleaches, snorkelers and researchers who used to visit may stop coming, affecting the livelihoods of people nearby. Literally and metaphorically, the color of the place leaches out.

In a recent paper in Science Advances, researchers present a potential way to stave off such disasters: breeding heat-tolerant algae. As temperatures rise, this tiny member of the ecosystem can still do its job, preventing wide-scale collapse. Its success at slowing down bleaching in lab experiments suggests that “coral stock with enhanced climate resilience can be developed,” the researchers write.

Over the past few decades, as bleaching events have struck coral communities from the Indian Ocean to Australia’s Coral Sea, researchers have searched for ways to shore up reef resilience. Some have found that natural factors, such as the presence of seabird colonies and protective farmerfish, can speed up coral recovery after a bleaching event. Others are watching corals that appear unaffected by warming—like a group of seemingly unflappable reefs in the northern Red Sea — and hoping they might act as refugia, preserving reef-associated communities until the oceans are more habitable.

Others are taking a more active role. For this new study, researchers worked with Cladocopium goreaui, a common coral symbiont. They put the single-celled algae through what they call a “thermal selection experiment:” subjecting different strains of it it to higher water temperatures, seeing which strains thrived, and turning up the heat on those even more, over and over again.

After four years and 120 generations, the researchers had nudged the algae up the thermometer until they were living and growing at 31 degrees Celsius—five degrees hotter than the average temperature of the central Great Barrier Reef. (For context, that’s also about the water temperature at which USA Triathlon recommends that long swimming races be cancelled.)

Further measurements revealed that their photosynthetic systems—from the photosystems that soak up light, to the chemical pathways that turn carbon dioxide into a useable form—were humming along effectively. (By contrast, regular old algae exposed to the same temperatures saw extreme photosynthetic declines.)

Next, they brought coral larvae into the lab, and let the specially-bred algae move in. When they cranked up the heat again, they got variable results—but several strains of the algae appeared to confer “enhanced bleaching tolerance” to the corals, they write.

These are hopeful results. But as the authors are careful to point out, breeding algae is not a cure for coral’s ills. It’s more like a much-needed bandage: “An opportunity to assist corals in coping with climate change,” the authors write, “until global warming is halted.” Only then can the whole community— algae and corals, fish and seabirds, researchers and snorkelers—mop our brows with relief.