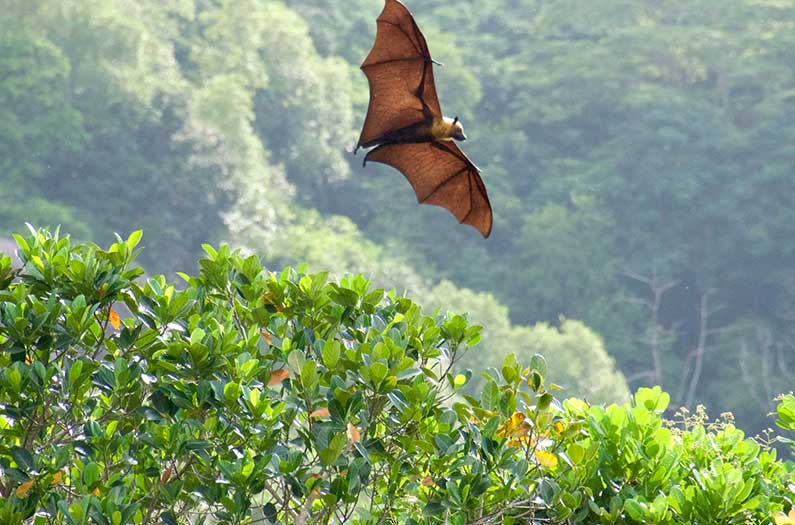 With help from bats, researchers created a coronavirus family tree
Bats can help us understand why and how these viruses sometimes jump to humans.
By Cara Giaimo
May 27, 2020

SARS-CoV2—the virus that causes COVID-19—has wreaked havoc on the human world, sickening millions of people and spurring us to change almost everything about how we live. Like other zoonotic diseases, such as Lyme disease and salmonella, its power comes from its novelty: because it did not evolve with us, we have few defenses against it.

But there is a type of animal that’s quite used to coronaviruses: bats. According to a recent paper in Scientific Reports, bat families and genera harbor their “own” coronavirus strains, which they’ve evolved alongside. Knowing more about these relationships could eventually help us get ahead of, and hopefully avoid, future outbreaks.

It’s been estimated that there could be at least 3,200 different strains of coronavirus present in bats, and hundreds have already been identified. The viruses don’t appear to cause harm to the bats. They also don’t seem to pass directly from bats to humans—a secondary host is generally needed.

For this study, the researchers focused on bats from islands in the Western Indian Ocean, as well as Mozambique. They used swab samples collected from 1,013 bats from 36 different species, including the Seychelles flying fox and the Sundevall’s roundleaf bat, known for its large nose. Overall, 8.7% of the bats tested positive for a coronavirus—although it’s possible that infection rates fluctuate throughout the year as the seasons change, the authors write.

The researchers then genetically sequenced the coronaviruses they found in the bats. Using this analysis—along with information from previous studies of strains found in dolphins, alpacas, humans, and other bats—the researchers built a phylogenetic “family tree” of different coronaviruses, showing how they are related to each other.

They found that, for the most part, each genus or family of bat carried a different strain of coronavirus, which it had likely been evolving alongside for millions of years. “It is clear that there is a deep coexistence between bats . . . and their associated coronaviruses,” Michael Goodman, one of the study’s authors, told the Field Museum. Bats from different families, genera or species rarely exhibited the same strain—although sometimes, when they shared caves and roosted near each other, they did.

There is still a lot we need to know about coronaviruses, from how transmission occurs between bats and secondary hosts to what might trigger a spillover event. But information like that found in this study is a building block, helping researchers start to predict where future outbreaks might come from.

“Before you can actually figure out programs for public health and try to deal with the possible shift of certain diseases to humans, or from humans to animals, you have to know what’s out there,” Goodman said. In a sense, bats harbor a living library of viruses we should keep an eye on: yet another service that they provide.