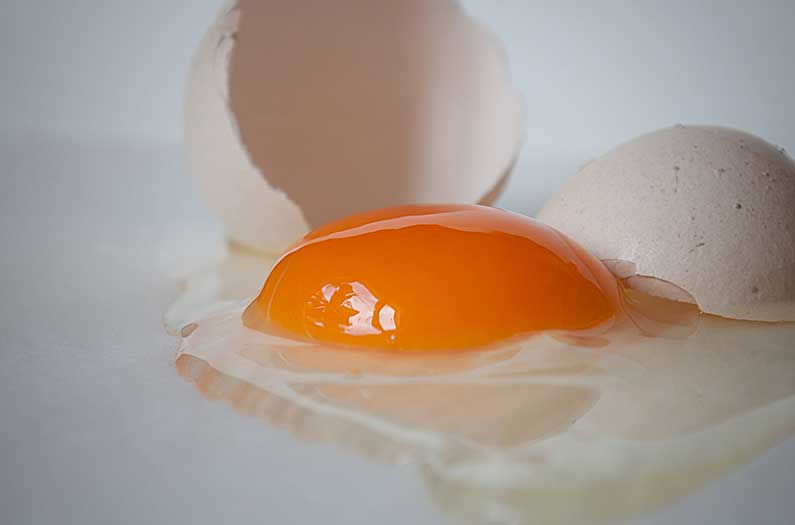 Egg waste could be repurposed to preserve fresh produce

Researchers double-down on food waste with a new invention that keeps both eggs and fruit out of the bin.
By Emma Bryce
June 12, 2020

An edible, egg-based spray, just fractions of a millimeter thick, could be a sustainable solution to preserving fresh produce—while making use of eggs that were once destined for the bin.

This two-pronged solution to food waste was developed in a recent study led by Rice University, which found that a mixture made up mainly of egg whites and yolks, and combined with a medley of other cheap and accessible ingredients, could provide a more effective and sustainable alternative to the plastic coverings and wax coatings that are typically used to preserve fruit.

When applied to avocados, bananas, papaya, and strawberries, the researchers discovered that their novel egg coating could keep fruit fresh for a whole week longer than fruits that were left untreated. The treated fruits ripened more slowly, stayed firmer for longer, and also had a higher weight at the end of the study period, compared to the untreated specimens which decomposed more quickly, and lost a chunk of their mass. Strawberries—which tend to decompose very swiftly—showed an especially large difference: while treated berries maintained most of their mass over the study period, the untreated ones lost about 60% of their weight.

The reason this worked so well came down to the various elements of the coating. The researchers made the mixture by using egg whites as the base, and then adding glycerol, a compound that helped make the substance more flexible instead of cracking, which dried egg whites are prone to do. One caveat of glycerol is that it tends to swell under humid conditions, so they had to also include a touch of egg yolk in the mixture, which has hydrophobic properties that reduce the mixture’s susceptibility to moisture.

Next, the researchers added cellulose, a compound that’s found in wood pulp and plant waste: this hardy material made the mixture mechanically stronger, and it also happens to be impermeable to water vapor. This reduced the evaporation of water out of the treated fruit, which helped explain why that produce maintained its higher mass for longer. Since cellulose is also less permeable to gas, it limited the passage of oxygen into the fruit, which consequently reduced oxidation levels, slowed ripening, and ultimately delayed decomposition.

The mixture also incorporated curcumin, an edible extract from turmeric that’s known to have antibacterial and antifungal properties. To test its effectiveness, the researchers applied E. coli bacteria to the mixture, and found that after 24 hours, there was no trace of bacteria left in the sample—suggesting that the curcumin successfully thwarts microbes, which would consequently slow down the rotting of fruit.

What’s more, experiments showed that the treatment is non-toxic, completely edible—and if consumers don’t like its taste, it can be washed off fairly quickly under running water. It’s also versatile: the liquid can be applied as a dip or a spray to fruits and vegetables, and at a thickness of only one micron, while still remaining effective.

This simple new invention might also have the edge on other methods currently used to preserve fresh produce. Most commonly we use surface waxing, which can cause digestive issues in some people; refrigeration, which is costly and emissions-intensive; and thin, single-use plastics to wrap up fruit, which only serves to worsen global plastic pollution. Comparatively, the eggy coating is cheap and sustainable. And it doubles down on food waste: tossed eggs account for 2% of food waste in the United States alone, and so this could provide a use for all that wasted protein, while simultaneously preserving fruit and veg for longer, reducing the likelihood that it’ll be thrown away.

“Food  waste  represents  a  huge  impediment  toward  eliminating  hunger  around  the  globe  and  extending  the  shelf-life  of  perishable  food  offers  a  direct  solution  to  this  problem,” the researchers write. Who knew that the solution could lie in waste, itself?