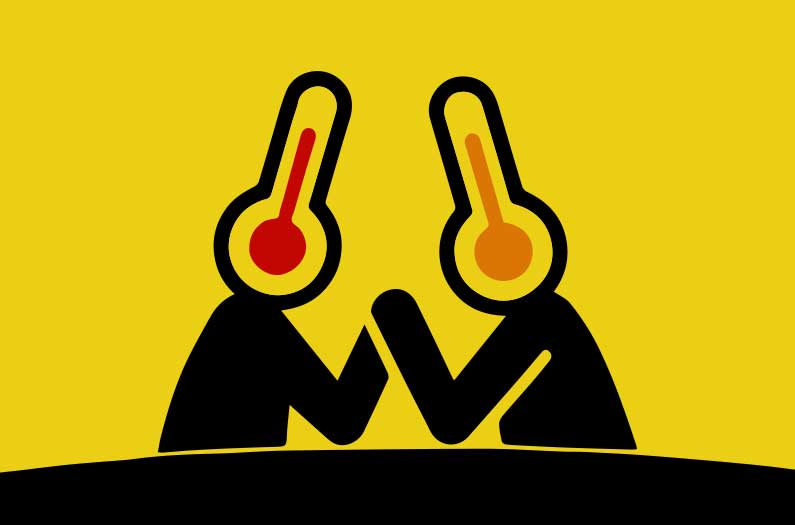 Is humanity doomed to wrestle over the planet’s thermostat?
An economic lab experiment reveals the complexities of governing solar geoengineering
By Sarah DeWeerdt
June 9, 2020

As climate change tipping points loom closer, there’s more and more chatter about directly manipulating the climate system rather than cutting carbon emissions alone. For example, chemicals that absorb solar radiation could be released into the atmosphere to reduce the planet’s temperature, a process known as solar geoengineering.

An international team of economists came to this conclusion by conducting an economic lab experiment. The researchers recruited students at Bologna University and sorted them into teams of two to play a computerized game. Each team was told to aim for a certain point value in the game–2, 6, or 10 – analogous to the way different countries might prefer different global average temperature values.

The team members decided how much ‘production’ – analogous to geoengineering effort – they would undertake to try to reach their ideal point value. They couldn’t communicate with other teams, but at the end of each round they found out what other teams did, which could then inform their strategy in the next round. This is a version of a public-good-or-bad game, a staple of experimental economics.

When two teams played the game–a 2-point team vs. a 6-point team, 2 vs. 10, or 6 vs. 10 – the team with the highest ideal point value tended to dominate, the researchers report in the Proceedings of the National Academy of Sciences. Scientists in the climate change governance field have had a hunch that countries that would benefit from lowering the global thermostat the most could undertake massive geoengineering efforts, leaving the rest of the world worse off. This is the first empirical evidence supporting this phenomenon, known as ‘free-driving.’

When the researchers created a simulacrum of a multilateral world by having six teams – two with each ideal point value – play together, the results were similar. The level of geoengineering ended up being about 10, even though 6 would have maximized the overall global welfare.

“The lion’s share of geoengineering efforts is borne by those with the highest desire to cool the planet,” the researchers write–although everyone else pays the price. That’s because the costs of geoengineering include not just the technology itself but the drag that a less than ideal temperature regime exerts on economies.

Things got even trickier when players were allowed to make ‘negative’ efforts. This scenario was analogous to countergeoengineering, in which countries might release chemicals into the atmosphere to trap heat, counteracting the cooling chemicals released by other countries.

At first glance, this prediction seemed to have been overly pessimistic. The overall average point value in this scenario ended up around 6, with some wasted effort on all sides to get there – albeit less wasted effort, reflecting a less severe geoengineering war, than predicted.

In fact, what was happening underneath was geoengineering chaos. The outcome of the game was unexpectedly variable from one round to the next; players struggled to predict what other teams would do and often massively undershot or overshot the optimal level of geoengineering. The upshot of all that instability: a less wealthy world overall, and greater inequality between countries, the researchers found.

In the real world, countries could avoid some of these risks by talking to each other about geoengineering plans. On the other hand, such talks could end in threats of military action or other sanctions on countries pursuing unwanted geoengineering efforts. Either way, “the nature of this technology sets the stage for new and serious governance challenges,” the researchers write.