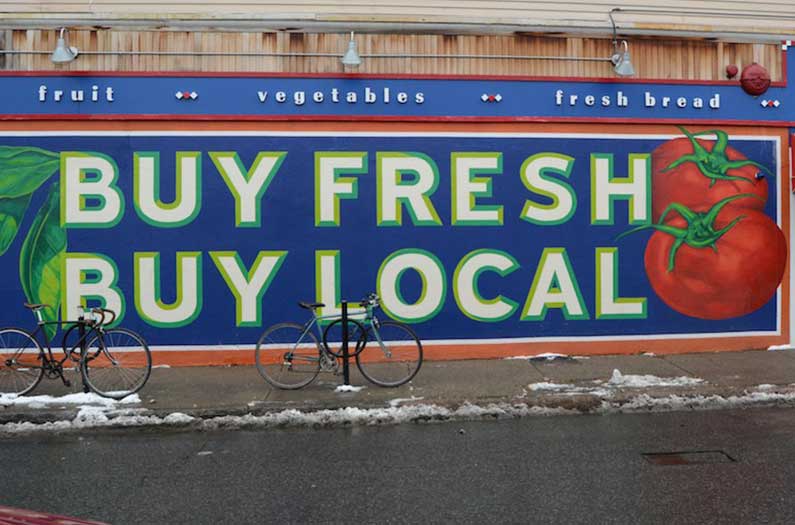 Only one third of the world can feed itself locally. For food security, researchers say trade is the answer.
By Emma Bryce
June 5, 2020

Less than a third of the world’s population could rely on local production to provide staple foods; the remaining majority of the planet depends on transport infrastructure and trade to remain food secure.

These findings, by an international group of scientists have painted a picture of a food system much more reliant on transport and trade to keep it afloat than we might expect.

The study looked at six groups of crops—temperate cereals like wheat and barley; rice; corn; tropical grains like millet and sorghum; tropical roots like cassava; and pulses—and then modeled the distance between the production of those crops, and their consuming populations. Crucially, the model was based on a hypothetical ideal, where the distance between people and crops was as small as possible.

Yet even under this ideal scenario, what the researchers found was that a mere 11 to 28% of the world’s population would be able to meet its need for specific crops within a 100 kilometer radius. Between 26 and 64% of the world would have to rely on production further afield—stretching out to 1000 kilometers or beyond—to get the staple crops they require. Inevitably, these greater distances would entail longer transport routes and more international trade.

Broken down by crop type, the analysis showed dramatic differences—partly because of climatic and geographical restrictions on where crops can grow. For instance rice, whose growing conditions are less restrained, was more available to the world’s population—meeting the needs of 50% of humanity within 650 kilometers. For temperate cereals like wheat, barley and rye, half the world could meet its needs within 900 kilometers (which is already stretching the definition of what’s ‘local’). However, a quarter of the world’s population would have to rely on cereals from more than 5,200 kilometers away.

Confining production strictly to 100 kilometers, currently just 22-28% of the world could satisfy the need for temperate cereals, rice, tropical cereals at that distance. For tropical roots and maize, that figure drops to 11-16%.

The researchers also modeled what would happen if we globally managed to double yields in these six crop groups using new farming technologies, and if we simultaneously halved food waste. This, they found, would shorten some of these vast distances—because technically, higher yields and less waste would make more food available in local contexts, and would reduce the amount that regions would have to import. In this case, Africa, South America, and Asia in particular would benefit from higher yields and less waste—leading to more local food production capacity. In parts of the world like Europe and Oceania, however, this didn’t make much difference.

Next, the study explored the actual reach of those six crop groups in reality, mapping their footprint across the globe—as shaped by their production, where they’re consumed, and how far they’re transported. These created what the researchers call ‘foodsheds’, which they describe as defined areas that are connected by regional movement and consumption of food.

These foodsheds, the researchers explain, reveal how modern food systems have shaped the actual availability of food. Using the six crop groups, they identified almost 2,000 of these individual sheds, ranging in size from small, very localized ones, to those which had a more global scope. For instance, rice, whose production is concentrated mainly in Asia, has nevertheless reached far beyond to be consumed in Africa, Europe, and in parts of South and Northern America. Its enormous reach exists both because it is sought after as a dietary staple, and because existing transport and trade structures have enabled it to reach regions far away.

Indeed, when the six crop groups were combined, together they created one huge global foodshed, emphasizing the fact that the complexity and interconnectedness of current food trade is at a point where it now covers almost every part of the world. And, as the researchers point out, that’s looking at only a handful of crops.

What this underscored again was the central role that trade has in making these staples available to people in the world. In light of this, the researchers suggest that we apply more scrutiny to the popular narrative that local is always better: while local production has many environmental benefits, the reality is that we can’t currently satisfy food demand with local food production. And yet, it’s also true that global trade comes with huge challenges too—such as the spread of industrial agriculture, and rising emissions from transport. What this study suggests is that we’ll need to reconcile that with the fact that it’s now an inextricable part of our food systems, and crucially also, a powerful tool for ensuring food security.

Trade as it stands isn’t the answer—but this research might provide a starting point to give it a more critical look at its place in our world, and therefore, hopefully, how to make it a better force for good in our food systems.