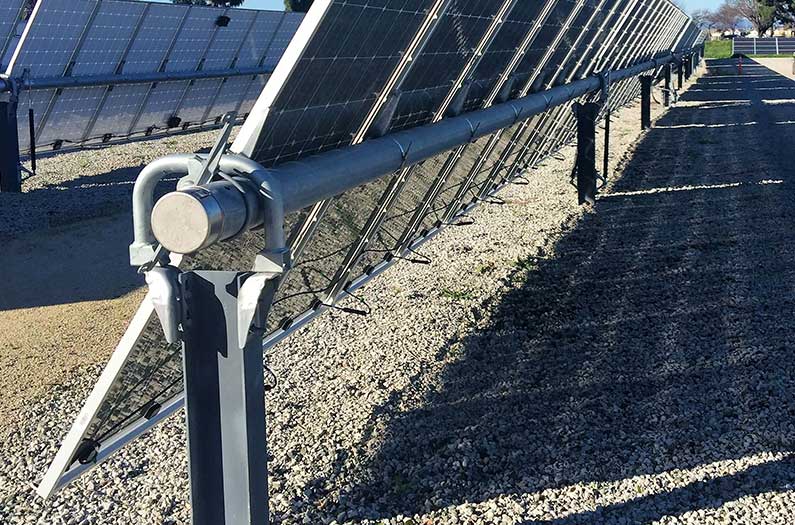 A new study suggests it is the most efficient, cost-effective way to capture the sun
By Prachi Patel
June 4, 2020

Two is better than one. And that’s true for solar panels as well. A new study shows that double-sided solar panels, which harvest sunlight from both sides, when combined with a tracking technology that allows them to follow the sun can produce 35 percent more electricity, and at 16 percent lower average cost.

Most solar installations around the world absorb light from one side and are installed in a fixed position. These single-sided, stationary solar panels can convert around 22 percent of the light that falls on them into electricity.

Double-sided panels, which also absorb solar energy that is reflected from the ground onto their rear side, have higher efficiencies. They are in use currently, as are tracking systems that tilt solar panels to directly face the sun.

But combining the two hasn’t been considered before. And, as the new study published in Joule shows, the simple idea could give big returns.

There are two kinds of sun-tracking technologies. Single-axis trackers tilt panels during the day from East to West, while dual-axis trackers also move the panels over the year as the sun’s elevation in the sky changes.

In their analysis Carlos Rodríguez-Gallegos of the National University of Singapore and his colleagues modeled the solar energy produced worldwide from different solar panel combinations at large photovoltaic farms that use thousands of modules.

The researchers used data from NASA’s Clouds and the Earth’s Radiant Energy System model, which measures the total radiation reaching the ground each day. By combining this with the amount of solar radiation a panel can receive based on its orientation, they calculated the average cost of generating electricity through a solar energy system over its lifetime.

Their calculations show that double-sided solar panels with single-axis tracking technology are the most cost effective pretty much anywhere on the planet. Equipped with dual-axis trackers, they would generate slightly more electricity, but that combination was expensive.

“The results are stable, even when accounting for changes in the weather conditions and in the costs from the solar panels and the other components of the photovoltaic system, over a fairly wide range,” said Rodríguez-Gallegos.