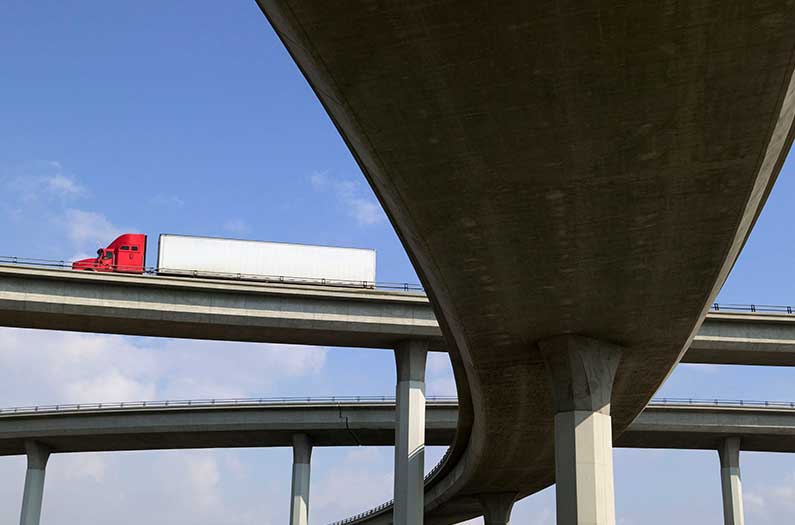 Ways to make roads stiffer are already available and could improve the gas mileage of heavy vehicles at little to no cost
By Prachi Patel
June 18, 2020

Large fuel-thirsty, pollution-spewing trucks carry billions of tons of freight around the U.S. every year. To reduce the amount of fuel trucks use, scientists now suggest looking at what’s underneath them. Making roads stiffer would improve the gas mileage of heavy vehicles at little to no cost, they say in a paper published in the journal Transportation Research Record.

Transportation is one of the biggest contributors to human-generated carbon dioxide emissions. And about a quarter of those transport emissions in the U.S. come from medium and heavy-duty trucks, according to the Environmental Protection Agency. And while cars and light-duty vans are starting to go electric, the shift to battery-powered freight trucks is likely much further down the road.

So researchers at the Massachusetts Institute of Technology decided to analyze the effect of roads on the fuel consumption of transport trucks. The immense weight of freight trucks slightly bends the asphalt road surface downwards under them. This makes them burn more fuel.

The MIT team analyzed state-by-state data on climate conditions, road lengths, materials properties, and road usage. They also modeled the greenhouse gas emissions over the next 50 years and evaluated the impact on fuel efficiency under different pavement resurfacing practices.

Their calculations showed that making 10 percent of US road surfaces stiffer every year would reduce a total of 440 megatons of carbon dioxide-equivalent emissions from trucking.

Several methods are already available to make roadways more rigid, they say. One is to add a small amount of synthetic fibers or carbon nanotubes to the asphalt. Another is to use larger aggregates in the asphalt mix, which would give a denser overall mix with more rock and less binder. Yet another way is to make roads with concrete instead of asphalt, which would be more costly but would give longer-lasting roads, reducing costs in the long run.

Recommended Reading:
Squid-inspired packaging keeps contents not too hot, not too cold, but just right