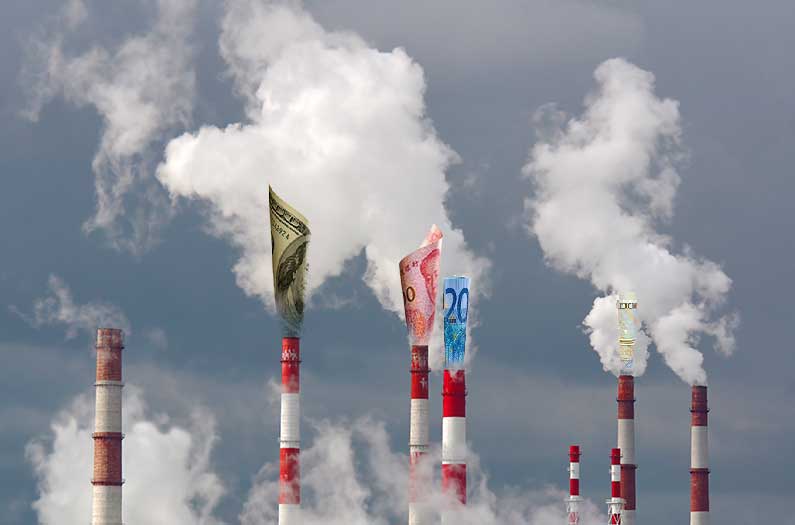 The largest study on the topic to date demonstrates that the higher a country’s carbon price, the more it reduces emissions.
By Sarah DeWeerdt
July 21, 2020

But there haven’t been any large international studies on the effectiveness of carbon pricing. So we don’t know whether its theoretical benefits really pan out in practice and whether it’s worth the political effort to get these policies enacted.

Now, the first rigorous study of carbon pricing across a large number of countries suggests the answer is yes. When countries put a price on carbon, their national emissions from fuel combustion grow at a rate 2 percentage points less than that of countries without a carbon price, a team of researchers in Australia reports in the journal Environmental and Resource Economics.

The researchers gathered data from the International Energy Agency on year-by-year carbon dioxide emissions from fuel combustion between 1997 and 2017. “These data cover 142 countries that together accounted for about 96% of the global population as of 2017,” the researchers explain. Forty-three of the countries had implemented a carbon price at the national or sub-national level by the end of the study period.

The researchers used three different modeling approaches to estimate how carbon pricing contributed to changes in countries’ carbon emissions over time. Crucially, their analysis controls for other variables that can influence emissions, such as renewable and energy efficiency policies, gasoline taxes, fossil fuel subsidies, and a country’s level of economic development and rate of economic growth. This enabled them to tease out the effects of carbon pricing from those of other climate-related policies.

Between 2007 and 2017, annual average emissions fell about 2% in countries without a carbon price, and rose about 3% in those without one. The researchers’ analysis suggests that 2 percentage points of this 5-point difference are due to the carbon price in particular.

Two percentage points may not sound like much, but the upshot is that “the emissions trajectories of countries with and without carbon prices tend to diverge over time,” the researchers write. “A reduction in an emissions growth rate of 2 percentage points per year adds up to very large differences over a decadal timeframe. It may well mean an absolute decline in a country’s emissions rather than an increase.”

The researchers also found that the higher a country’s carbon price, the more it reduces emissions. Specifically, each additional 1 Euro per tonne of carbon dioxide is associated with a 0.3% reduction in annual emissions growth. Most of the carbon prices that have been implemented so far are pretty low. So the findings suggest that there’s still lots of room to increase the impact of carbon pricing, both by rolling the policy out in more countries and by bumping up the price elsewhere.