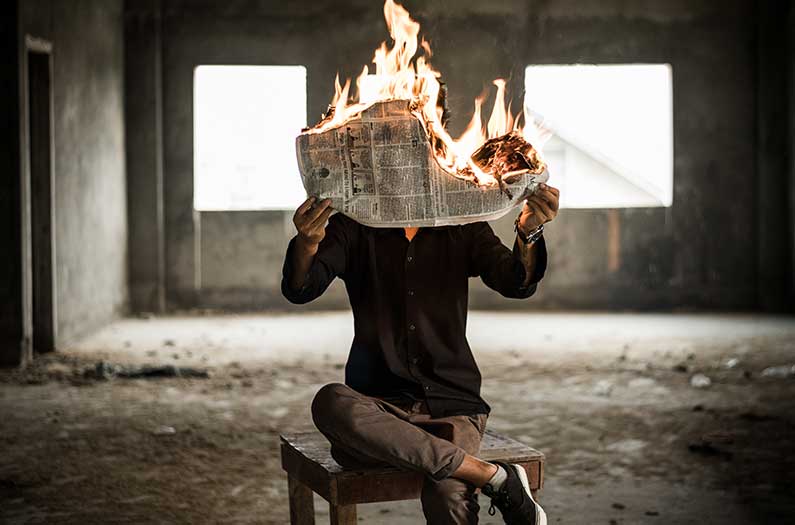 It's not always clear who and what drives the public discourse about climate change
By Sarah DeWeerdt
July 28, 2020

Why is climate change doubt so persistent in the United States compared to other wealthy countries, and why is does climate policymaking so often stall out? The answer may lie in part with the media: press releases opposing climate action are about twice as likely to get picked up by the country’s three largest newspapers than releases supporting climate action, according to a new study.

Brown University sociologist Rachel Wetts gathered a random sample of 1,768 press releases about climate change put out between 1985 and 2013. She also identified all articles published about climate change in the New York Times, USA Today, and the Wall Street Journal from 1985 to 2014 – 34,948 articles in all.

Wetts categorized the press releases as either supporting or opposing climate action. Then, she compared the releases and the newspaper articles using plagiarism-detection software to identify similarities suggesting that an article was based on a particular press release.

Past research has looked at what messages are prominent in media coverage of climate change. The new study adds to this by considering all messages that attempted to gain media coverage and analyzing which ones were successful in breaking through. This opens up the opportunity for a more rigorous test of various hypotheses about who and what drives the public discourse about climate change.

That meant that overall, 18.4% of all releases that received media attention had messages against climate action. The findings support the idea that the journalistic norms of balance and objectivity – the principle that news coverage should convey both sides of an issue without picking one – magnify climate contrarianism.

Some researchers have suggested that these norms have become less important in shaping media coverage of climate change in recent years. But, Wetts writes, “I find no indication that this disproportionate coverage of messages opposing climate action has declined or reversed since the mid-2000s.”

It’s also not a matter of ideology: coverage in the most conservative newspaper, the Wall Street Journal, didn’t account for the excess attention to climate-denial press releases.

It could be that media coverage of opponents of climate action has become more critical over time, Wetts acknowledges. Her study doesn’t provide insight into that possibility. “For my purposes, a critical reference to an organization’s message is still considered as providing visibility to that interest group’s perspective,” she writes – after all, as the saying goes, there’s no such thing as bad publicity.

Wetts also analyzed the characteristics of organizations whose press releases got coverage. She found that press releases from larger businesses were more likely to be picked up than those of smaller businesses. And press releases from business coalitions and professional and trade associations were more likely to receive coverage than those from other types of organizations. This may be because these entities are perceived as important to overall economic well-being, so their perspectives are seen as especially newsworthy, Wetts says. The finding “supports claims that business interests have disproportionate sway in shaping policy debates in contemporary American democracy,” she writes.

“You’d think, if anything, businesses with greater scientific expertise would receive more newspaper coverage,” Wetts said in a statement. “But I found the opposite to be true.”