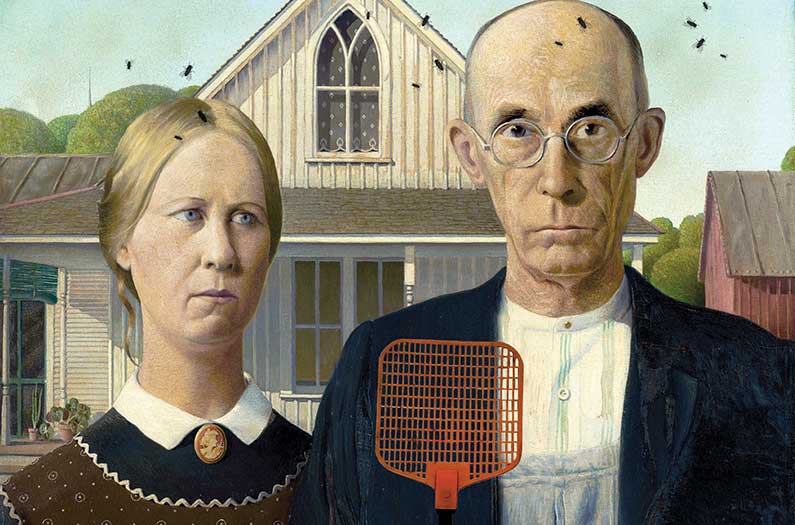 
For years Arnold van Huis has evangelized about the prospect of people around the globe happily and sustainably eating insects for protein. A tropical entomologist at Wageningen University in the Netherlands, van Huis has, among other things, coauthored a landmark United Nations report on the subject—as well as a cookbook.

Not surprisingly, it’s been a hard sell. In parts of the world, some of the nearly 2,000 known edible insect species are common menu items; yet insect food in the West remains a mostly niche affair.

But don’t write off the idea just yet. Insects are starting to enter the commercial agricultural food chain, albeit indirectly, through animal feed and pet food—a future, incidentally, that van Huis also envisioned. In fact, insect agriculture is a mini-livestock industry that could get big. 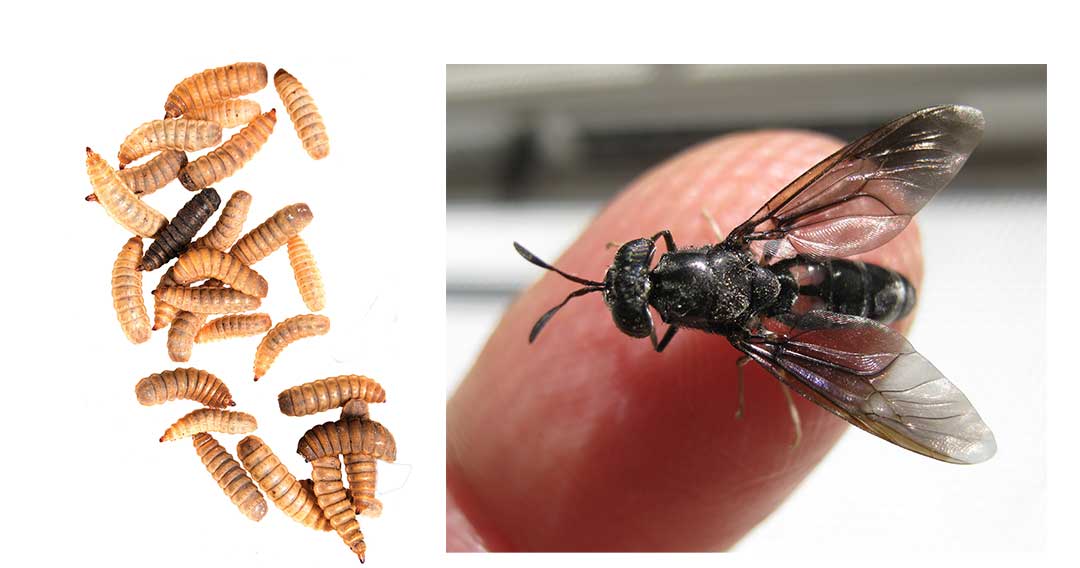 *Actually, it’s the fly larvae, not the adult flies, that constitute the protein source.

Shoppers can now buy fly-fed farmed trout in French supermarkets, eggs from fly-fed chickens in the Netherlands, and premium pet foods made with crickets in Chicago or with flies in Canada, the United Kingdom, and Europe.* Nascent industrial-scale insect farms are starting to dot the globe, with big feed and pet-food players such as Cargill, Skretting, Bühler, and Purina getting into the game.

Crickets, mealworms, and other insects are commercially farmed. But the mini-livestock of choice for many of the biggest industrial insect operations around the globe is the black soldier fly (not to be confused with the common housefly). Why? In nature, fast-growing Hermetia illucens larvae stand out for their ability to gorge on a mind-bending range of organic wastes. The insect is a hyper-efficient nutrient upcycler, capable of creating high-value protein for fish, pigs, chickens, cats, and dogs. Using back-of-the-envelope math, every 1,000 pounds of waste can produce 200 to 300 pounds of insect biomass, with larvae that are some 40 percent protein and 30 percent fat, says Texas A&M University entomologist Jeffery Tomberlin, who has studied the insect since 1998. The black soldier fly is also the most common insect for which the industry has managed to get regulatory approval for certain feed uses in the United States, Canada, and the European Union. Moreover, insect farmers hope to monetize the fly’s every component through products such as protein meals, nutrient-rich oils, and beneficial frass (poop and exoskeleton) as premium fertilizer. In short, they are eyeing zero-waste potential.

Industrial black soldier fly farming is an indoor affair that uses increasingly sophisticated (and often closely guarded) feedstock mixes, automation, robotics, and other technology for rearing, harvesting, and processing. Larvae are typically grown in vertical crates in a climate-controlled environment. They generally feed on some of the estimated 1.3 billion tons of food that is lost or wasted globally each year. 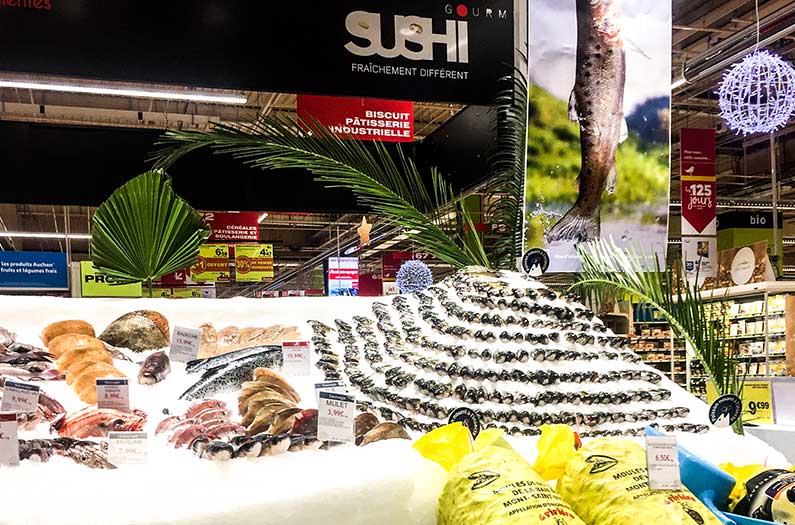 Shoppers can now buy fly-fed farmed trout in French supermarkets, eggs from fly-fed chickens in the Netherlands, and premium pet foods made with crickets in Chicago or with flies in Canada, the UK, and Europe.

InnovaFeed plans to open in 2020 one of the bigger industrial black soldier fly farms, in Nesle, France. At capacity, the facility could produce 15,000 metric tons of insect protein a year. The French biotech company is building its fly farm next to a plant that converts wheat to starches and sugars in order to seamlessly source wheat byproducts as larvae feed. UK-based AgriProtein likewise is developing a Jurupa Valley, California, operation designed to upcycle as much as 90,000 tons of food waste annually. And Dutch company Protix has a facility in Bergen op Zoom in the Netherlands that processes roughly 70,000 tons of food waste every year. Many of the larger insect companies are now in Europe. But there are big farms in Africa, Asia, and North America, too. And several European companies plan to expand beyond Europe.

In addition to producing animal feed, some industrial insect farmers also see opportunities to make a dent in pet-food meat products. A recent UCLA study pegs cats and dogs as responsible for up to 30 percent of the environmental impact of meat consumption in the US. But it’s the aquaculture industry’s urgent demand for alternatives to soy-based feed and fishmeal that is driving the current insect farming boom. Aquaculture is the world’s fastest-growing food sector, and fish farmers face volatile soy prices and rising fishmeal costs as overharvesting of wild forage fish used in fishmeal takes its toll.

So, could black soldier fly protein be more sustainable than conventional feed sources? Early research results are guardedly optimistic. Unlike soy production—which has led to deforestation in the tropics—indoor-farmed black soldier fly protein can be grown locally, year-round. The authors of a recent sustainability analysis at a Protix pilot plant in the Netherlands suggest that the black soldier fly may already be a more environmentally viable protein source than soy in places where water and land are scarce. They found that producing one kilogram of black soldier fly meal consumed (and polluted) 93 percent less water than producing one kilogram of soy meal. Another pivotal issue is energy use. Indoor insect farming is energy-intensive—causing some companies to already turn to renewables.

As global demand for farmed fish and meat only continues to grow, many researchers see potential for insect feed to lower the environmental footprint of food production. But that potential largely hinges on what the larvae are fed, says Sergiy Smetana, an environmental scientist at the German Institute of Food Technologies who has analyzed black soldier fly feed impacts. Waste products that are not already used for animal feed or otherwise recovered for re-use have the greatest sustainability prospects, he and others suggest. Looking ahead, industry watchers see the need for more safety research and clearer regulations. Today, a tangle of regulations limits what commercial farms can feed their larvae and what animals can in turn be fed with their products. In the West, black soldier fly protein has been approved most widely as feed for farmed fish.

Van Huis, for his part, is urging researchers to explore the feasibility and safety of using low-value waste—from catering castoffs to manure—to make animal feed from black soldier flies. Tomberlin, who was part of the team that published the black soldier fly genome in 2019, states that in nature, the larvae feed on “pretty much anything decomposing, [and] we still haven’t really found the limits.” Black soldier flies are extremophiles. Researchers have even discovered that they have antimicrobial and pathogen-killing properties. Further research and selective breeding efforts for the mini-livestock may bring about new breakthroughs that pay off for both the insect industry and sustainability. “We’re still just scratching the surface on the capacity of this insect,” Tomberlin says.

Lynn Schnaiberg is a Seattle-based journalist who has written for Education Week, Outside, and Business 2.0. She is the author of Outside magazine’s Urban
Adventure Chicago. 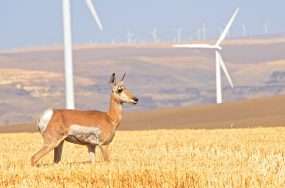 As the countries rush to build more solar and wind power, conservationists worry it could crowd out wildlife. A new forecast suggests there's room for both in many places.