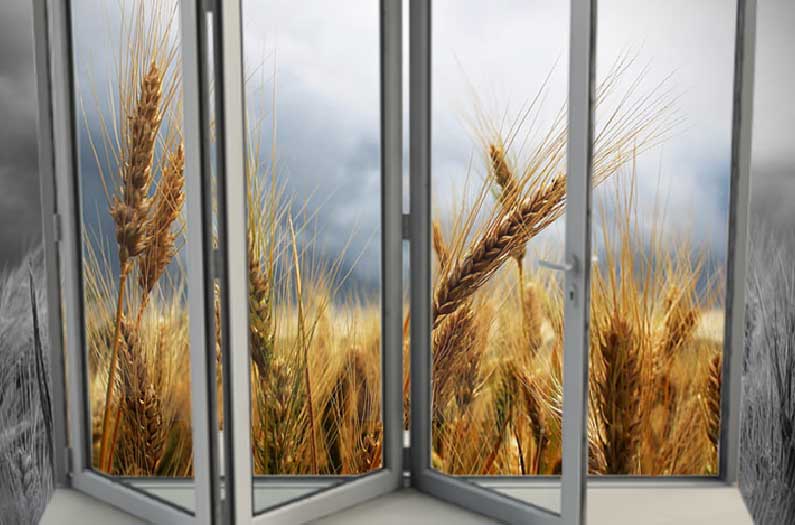 They could feed the world on a fraction of the land area, but at what energy cost?
By Emma Bryce
July 31, 2020

Bread made from high-rise farms may be a thing of the future. Researchers have found that if we started growing wheat in stacked vertical farms instead of the field, we could generate 600 times more of this grain than traditional farming methods do—all while freeing up huge amounts of land from agriculture.

But before this could become a reality, we’d need some serious technological innovation to offset the controversially high energy costs of vertical farms.

Wheat currently supplies 20% of calories and protein for the world’s population, which is projected to grow to 11 billion people by 2100. With that expanding population, we’ll need a 60% increase in the worldwide production of grain. The researchers on the new study wanted to investigate how vertical farming—the production of crops across multiple floors in enclosed buildings—could help to plug that gap.

To find out, they used a crop simulation tool called DSSAT-NWheat, which projects yield based on the simulated field conditions, incorporating inputs like temperature, light, and water. This simulation showed that if wheat were grown inside a 10-floor vertical farm, covering one hectare of ground land, and under optimal conditions, the crop could generate almost 2000 metric tons of grain per hectare. That’s about 600 times more than the current annual world average of 3.2 metrics tons per hectare. Ramping things up to simulate a 100-floor farm, the researchers showed that the vertical farm could generate 19,400 metric tons of grain per hectare —6000 times more than the average hectare of farmland produces every year.

In some countries, vertical farming is already used to produce foods like lettuce and herbs where plenty can be grown at more confined scales. But crops like wheat—which require more space and typically need a lot of sunshine—haven’t yet been commercially produced in this environment. Showing that we could grow staple crops in this way, instead of only niche foods like salad greens, is an important step.

This massively efficient production approach would generate enough food to feed an expanding world population. By growing food vertically on smaller plots of land, it could also drastically curtail farmland expansion, an enormous source of emissions and a driver of biodiversity decline. Growing food indoors, under perfectly controlled conditions, would shield crops from the vagaries of climate change, and therefore bolster food security. It would also reduce pesticide use, and limit the chances that they’d get into soil and water.

But as the researchers caution, we shouldn’t get too swept up by these possibilities: farming wheat in high-rises—such a tantalizing idea—nevertheless comes with one considerable caveat. The cost, both financially and energy-wise, of artificially lighting up the interior of a vertical farm so that crops can photosynthesize, is enormous, enough to draw a question mark around the viability of this farming method. This is a problem that already haunts vertical farming in general: considering that its image depends partly on the idea that it’s better for the environment, the high energy usage—and consequent emissions contribution—makes it somewhat controversial. The researchers also point out that most field-based cereal farming around the world is heavily subsidized to make it financially viable, so the elevated costs of vertical wheat farming would make it difficult to compete with traditional modes of production.

Innovation in energy production could go some way to closing this gap. The researchers highlight the growing potential of renewable energy to provide all the light needed to keep crops growing artificially indoors. But even so, if vertical wheat farming does take off, it’s likely to form only a tiny part of the market at first, until we figure out how to make it less costly. And in the meantime, the researchers acknowledge that there are more urgent agricultural challenges to tackle, and which we already know can improve food security and ease the pressures on our planet—such as reducing food waste, and diversifying our food sources so that we’re perhaps not so reliant on single monocrops.

Yet, it may also be the case that entirely separate forces speed up energy innovation and make vertical wheat farming a reality one day. For example, the association between wheat prices and food riots we’ve seen in the past “could be reason enough to develop and install some indoor wheat production facilities,” the researchers suggest. Climate change in regions already beset by food insecurity might also hasten the arrival of bold new farming approaches like this one.

So, while we might not quite be ready for vertical wheat farming, options like these are likely to become more important in our changing world. “Although it is unlikely that indoor wheat farming will be economically competitive with current market prices in the near future,” the researchers say, “it could play an essential role in hedging against future climate or other unexpected disruptions to the food system.”