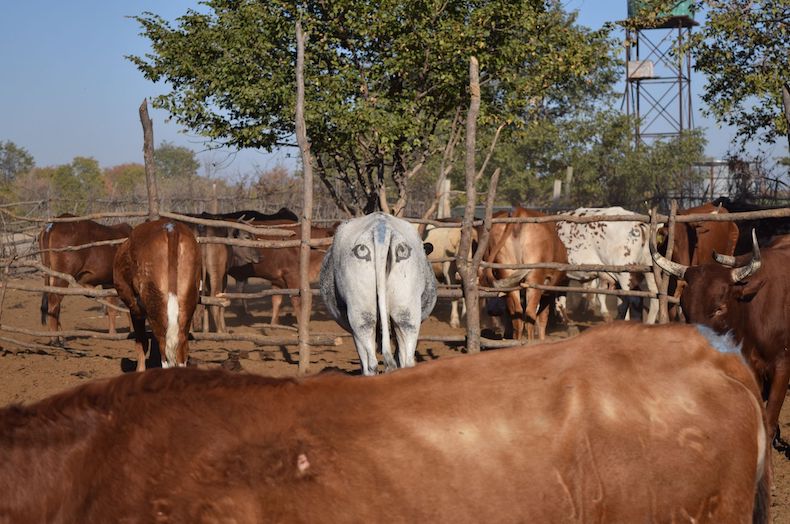 In a new study, cows with eyespots painted on their derriéres were left alone by large predators.
By Cara Giaimo
August 26, 2020

Across the world, livestock farmers and large predators find themselves at odds over resources. In East Africa, lions who kill cattle are often killed in turn, inspiring labor-intensive conflict mitigation efforts. In Bhutan, tigers pushed closer to farms by climate change suffer the same fate, as communities try to create solutions. And in California, where ranchers lose sheep and alpacas to cougars, the state government struggles to determine when to allow lethal control.

These are complex situations, generally brought on by centuries of economic and political decisions. But a group of researchers has come up with a simple potential solution: just paint huge eyes on the livestocks’ butts.

A number of small animals, including butterflies and frogs, sport large, intimidating eyespots. These eyespots scare away predators, perhaps by disorienting them, or tricking them into thinking their would-be prey is actually a different, larger animal.

In 2015, Neil Jordan, a conservation biologist at the University of New South Wales in Sydney who also works with the Botswana Predator Conservation Trust, was approached by a farmer who had lost a number of cattle to lion attacks. Jordan had been thinking about whether eyespots would dissuade predators of large animals, too. “I thought, ‘It’s a bit of a weird idea,'” he says. “This would be a good chance to give it a go.”

After designing a particularly intimidating set of eyes, team members painted them on a subset of cows in the herd, one on each side of the rump. (“We called them ‘scary ass cows,'” Jordan says.) It worked—none of those cows were eaten. So for their new study, published this month in Communications Biology, the team worked with fourteen herds, all in Botswana. Within each herd, some cows got eyespots, some got black X’s, and some went au naturel. Some herd members also got GPS collars, so the researchers could account for differences in range or predator exposure.

Overall, fifteen unmarked cattle were killed by lions or leopards, as were four X-marked ones. But no cows with eyes on their butts were harmed. Inspired by Jordan’s earlier study, members of a wildlife NGO in Jaipur, India, have also been successfully using the technique for a few years in Jhalana Leopard Reserve.

These results are encouraging, especially for such a low-cost method. But as Jordan points out, its efficacy is not completely proven. Lions and leopards might eventually get used to the derri-eyes, and become undeterred.

And because the experimental design requires both marked and unmarked cows, “you’re still providing sacrificial lambs, if you like — the unpainted ones,” he says. It’s not clear whether, if every cow had an extra set of peepers, they would all be left alone. (Fake eyes also don’t work on pursuit predators — like wolves, hyenas, or African wild dogs — which chase down their prey rather than sneaking up on it.)

It is effective enough, though, that they are expanding again. With funding from the Taronga Conservation Society in Australia and the Natural Selection Conservation Trust in Botswana, the Botswana Predator Conservation Trust has hired a community coexistence officer, who is helping farmers there get the tools and training they need to use the technique. The team has also rolled out an implementation guide, and is continuing to work on logistical issues, like finding longer-lasting paint.

Meanwhile, word is spreading, and this new butt tattoo trend is making inroads elsewhere. “We’ve been approached by people in Peru, Kenya,” and Argentina, Jordan says. Keep an eye or two out at your local farm.