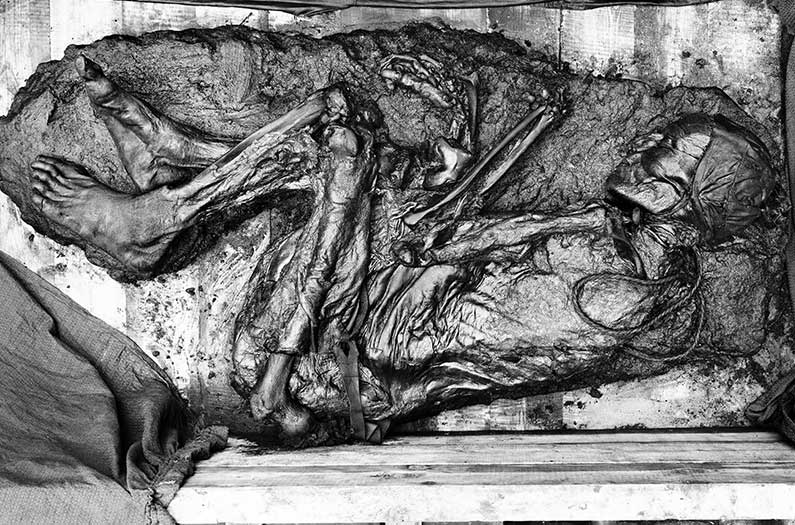 Archaeologists think of artifacts buried underground as safely preserved. That might not be the case much longer.
By Sarah DeWeerdt
August 4, 2020

Almost 9,000 years ago, in the middle of the Mesolithic period, a settlement was established along the shores of a shallow lake near the southern tip of Sweden. Over the next 500 years, the people who lived there left behind scores of bone, antler, wood, and flint artifacts, as well as resin, seeds, and hazelnut shells. Many of these objects were preserved when the lake turned into a peat bog.

Researchers who excavated portions of the site, known as Ageröd, in the 1940s and 1970s used their finds to gain insights into when, where, and how many people lived in the settlement, what resources they relied on, and how their activities varied with the seasons.

But “the window of opportunity to obtain information from the archaeological organic remains at Ageröd is rapidly closing,” researchers write in a paper published July 29 in PLoS ONE. Buried artifacts preserved for millennia are now decaying. And climate change is likely partly to blame.

It’s something of an open secret in archaeological circles that artifacts dug up today from the bogs of northern Europe aren’t as well preserved as those recovered decades ago, and researchers have suspected that objects buried underground are deteriorating faster than in the past. But until now no one has documented this in a systematic, quantitative way.

The researchers excavated five small pits at Ageröd in 2019 and recovered 61 fragments of bone that they were able to identify to the family or species level. They compared these to 3,716 bone pieces from the previous excavations.

The 2019 excavation turned up few bones from small mammals and none from birds, although both groups are represented among the older finds: the smallest bits of the past disappear first.

Lots of bones from larger animals, primarily ungulates, or hooved mammals, were found across all time periods. But the bones of larger animals from the 2019 dig were in poorer condition than those recovered previously.

The researchers quantified the amount of weathering, or deterioration, of bones from the different excavations. Because the weathering of the 2019 bones was so extensive, they had to create an additional classification system to describe it.

Ditches dug by local farmers to drain the bog for agriculture over the last century probably contributed somewhat to drying out the bog’s upper layers and setting off the decomposition process. But these were relatively low-tech efforts, and the area has seen little other development. In short, “nothing ‘special’ has happened to the Ageröd site” over the last 75 years as deterioration took root and accelerated, the researchers write. And that implicates larger forces at work.

Chief among them is likely to be climate change, which results in warmer summers, dry conditions, larger than normal fluctuations in groundwater levels, and drying of the soil. (Acid precipitation may have also contributed to the deterioration of artifacts in the bog.)

The likelihood that droughts will become more frequent and severe with climate change “raises serious questions about the preservation conditions of similar wetland sites in Northern Europe,” the researchers write. What’s happening at Ageröd is probably happening elsewhere too.

Ageröd’s remaining artifacts could be lost entirely within a couple of decades if nothing is done, the researchers predict. That would represent the loss of more than a mere historical curiosity. “The record being destroyed is also a long-term perspective database which, if properly used, can help us create models of future environmental scenarios,” the researchers said in a statement.

The Mesolithic, which began just as the last Ice Age ended, was a time of rapid climate warming when humans were exerting ever-greater influence over their environment. Knowing how past cultures have responded to such shifts could be part of the key to our own future, they argue.