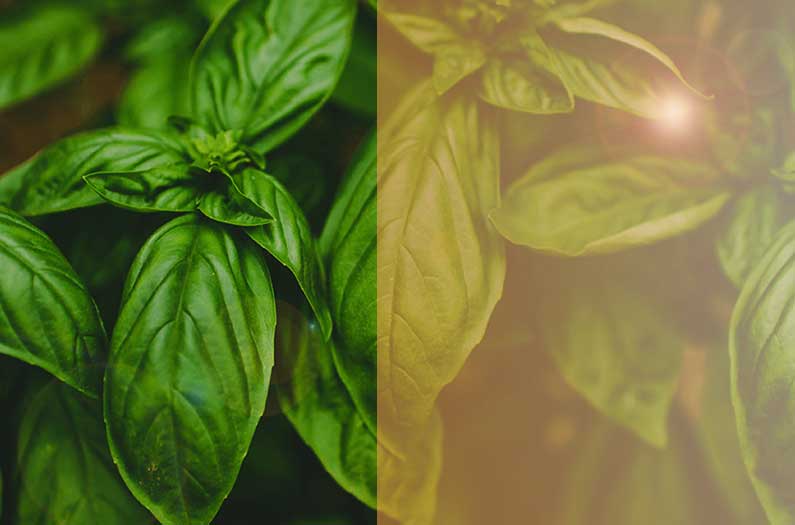 Researchers made the unexpected discovery that the basil and spinach grown under tinted panels were considerably higher in protein
By Emma Bryce
August 7, 2020

Growing crops under transparent, tinted solar panels may result in leafier, more nutritious plants, while also increasing farmers’ incomes by up to a third through electricity generation, a new study finds.

The practice of growing food under solar panels—a growing trend in farming known as agrivoltaics—is already celebrated for its potential to save vast amounts of land by doubling up farming with energy production. Solar panels on farmland have other benefits too: they can protect crops from extreme weather, shade them in extreme heat, and reduce evapotranspiration, which limits irrigation costs on farms.

But, there’s a caveat: opaque panels cast crops in constant shade, and in so doing, slow down photosynthesis, which limits plant growth.

The researchers on the new study, published in Advanced Energy Materials, wanted to explore the benefits of a new design: transparent, tinted panels that filter certain wavelengths of light down to the crops below, while maintaining electricity generation above. Using basil and spinach plants as test crops, the researchers grew them under tinted solar panels that absorbed light from the blue and green parts of the spectrum, while filtering red light to the crops below—which is particularly important for photosynthesis. Then they compared these crops with plants below under clear panels, which were intended to mimic the effects of full sunlight on conventional farms (while controlling for the protective benefits of solar panels.)

Overall, the mass of the crops grown beneath the tinted panels was lower than those grown under the clear panels. For the basil crops that wasn’t actually significant, though the decline was larger for spinach. But even then, the spinach yields produced under the tinted panels were still similar to production levels from conventional commercial spinach farms, the researchers report.

More interestingly, they noticed an intriguing shift in growth physiology that also adds more nuance to these findings. They found that in the crops grown beneath the tinted panels, the root mass was smaller, while the rate of biomass increase in leaves and stems was much larger, compared to the crops grown beneath clear panels. For basil, the rate of the aboveground mass increase was 63% higher, while for spinach it was 35%. This suggests that crops grown under tinted panels and exposed to less sunlight are more efficient in the way that they photosynthesize, causing them to redistribute more of their growth resources to the leaves and stems.

Conveniently, in the case of these plants, those are also the desirable parts of the crop: “From a farmer’s perspective, it’s beneficial if your leafy greens grow larger leaves—this is the edible part of the plant that can be sold,” the researchers point out. It also suggests that tinted panels might best be suited to crops that produce edible parts above ground.

But perhaps the most convincing aspect of the tinted solar panel arrangement is that without compromising the growth of crops too considerably, it could also produce a serious income boost for farmers, depending on the crop.

The researchers calculated that the combined income generated by spinach crops and electricity generation would rise by 35%, compared to standard spinach farms. For basil, that figure was smaller—2.5%. But that’s likely because basil has a much higher market value of basil—selling for five times more than spinach—and the added electricity only just offsets that cost.

Tinted panels could also be applied to other crops and farming environments to great financial benefit. For instance, in indoor greenhouse environments, where many leafy crops are already grown, replacing the regular glass panels with tinted solar arrays could provide farmers in those contexts with additional income (or potentially offset the costs involved in greenhouse farming.)

The researchers also made the unexpected discovery that the basil and spinach grown under tinted panels were considerably higher in protein: there was 14% more in basil leaves, and a 53% increase in spinach leaves. It’s possible that this boosted protein content plays a role in helping plants photosynthesize. This surprising discovery could also be particularly beneficial in a world that’s moving towards high-protein plant replacements for meat.

Altogether, the findings create a new vision for how crops and energy production can co-exist, transforming the idea of agrivoltaics “from just solar-sharing to selective utilization of different light wavelengths,” the researchers say. The study adds weight to the argument for agrivoltaics not just as a way to save land, but also possibly to improve the quality of crops—and crucially, to bolster the financial security of farmers, too.

As the researchers surmise: “Agrivoltaics can enrich the portfolio of farmers, mitigate risks associated with climate, and vastly enhance global photovoltaics capacity without compromising agricultural production.”