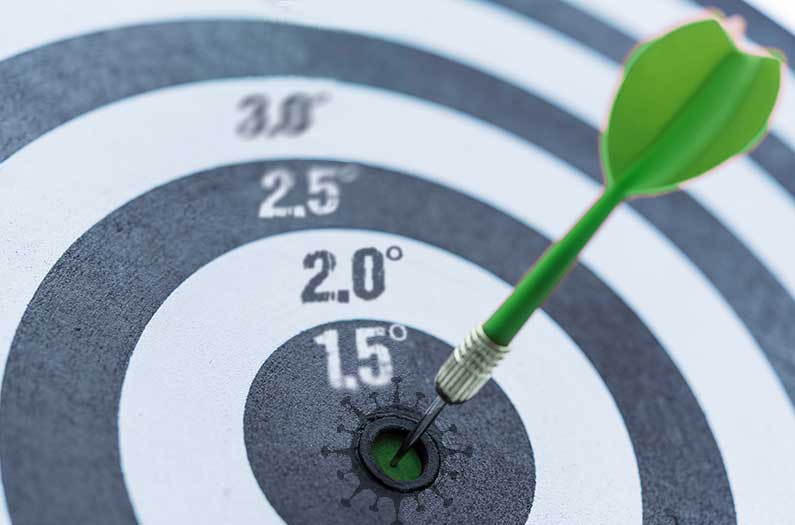 Investing an additional 1.2% of global GDP in climate-friendly technology as part of recovery would slash emissions by half in 2030
By Sarah DeWeerdt
August 11, 2020

The lockdown measures instituted in response to the coronavirus have dramatically reduced greenhouse gas emissions and air pollution around the world. But these measures will have little long-term effect on climate change, a new study suggests.

Even if some lockdown measures continue until the end of 2021, global average temperature in 2030 will only be 0.01 °C lower than otherwise expected, an international team of researchers reported August 7 in Nature Climate Change.

But the longer-term response to pandemic does represent an opportunity to change the climate trajectory. If strong “green recovery” policies are put in place in the next few years, these could avoid 0.3 °C of warming by 2050 and keep overall warming under the Paris Agreement’s 1.5 °C benchmark.

The new study is itself a product of the lockdown. When Harriet Forster’s school exams were canceled in the spring, she began working with her father, Piers Forster, a researcher at the University of Leeds in the UK, to analyze cell phone location data from Apple and Google. They calculated how people’s movement patterns changed during the lockdown and the resulting effects on emissions of 10 different greenhouse gases and air pollutants.

The pair also worked with a larger team and additional sources of data to model the effects of these changes on temperature, as well as the impact of post-pandemic recovery policies.

Carbon dioxide, nitrogen oxides, and other pollutants fell by 10-30% worldwide during the lockdown period. The emissions reductions probably reached their greatest extent in mid-April 2020, the analysis showed. That month, more than half the world’s population reduced their travel by more than half compared to the pre-pandemic baseline.

But because the fall in mobility is temporary, it will probably have only a small effect on atmospheric carbon dioxide. The researchers calculate that the lockdown will reduce the overall concentration of the greenhouse gas in the atmosphere by about 2 parts per million two years from now compared to what it would otherwise have been.

In the short term, reductions in emissions of nitrogen oxides (which warm the atmosphere) will be largely canceled out by reduced sulfur dioxide emissions (which have a cooling effect). Overall the researchers expect the pandemic to result in a very slight cooling effect of  0.01 °C in 2030.

“Without underlying long-term system-wide decarbonization of economies, even massive shifts in behaviour only lead to modest reductions in the rate of warming,” the researchers write. “The climate effect of the immediate COVID-19- related restrictions is close to negligible and lasting effects, if any, will only arise from the recovery strategy adopted in the medium term.”

If post-coronavirus recovery policies increase investment in fossil fuel development by 1% of global GDP, they calculated, this will raise emissions by 10% in 2030 compared to current policies, and wipe out the chance of limiting warming below the 1.5°C threshold.

In contrast, investing an additional 1.2% of global GDP in climate-friendly technologies as part of those recovery policies would slash greenhouse gas emissions by half in 2030 and result in net-zero carbon dioxide emissions globally in 2050. In turn, that would halve the amount of additional warming expected under current policies, and give the world a better-than-even chance at holding total warming below 1.5 °C.

But achieving such a green recovery will require overcoming the frailties of human psychology, another recent study suggests. Researchers showed study participants images representing 12 environmental threats, such as endangered polar bears, polluted rivers, and wildfires. They subtly directed people’s attention to certain threats, such as by telling them to press a certain computer key when an image of a polar bear came on the screen.

In essence, the researchers say, humans are hard-wired to only be able to focus on one threat at a time. So COVID could hamper long-term response to climate change by diverting our attention from the threat.

The good news is that it only takes brief attention to raise people’s concern again. So one solution is to just keep reminding people about climate change. Or, as the first study showed, climate advocates can also emphasize that climate change and coronavirus are really part of the same story.