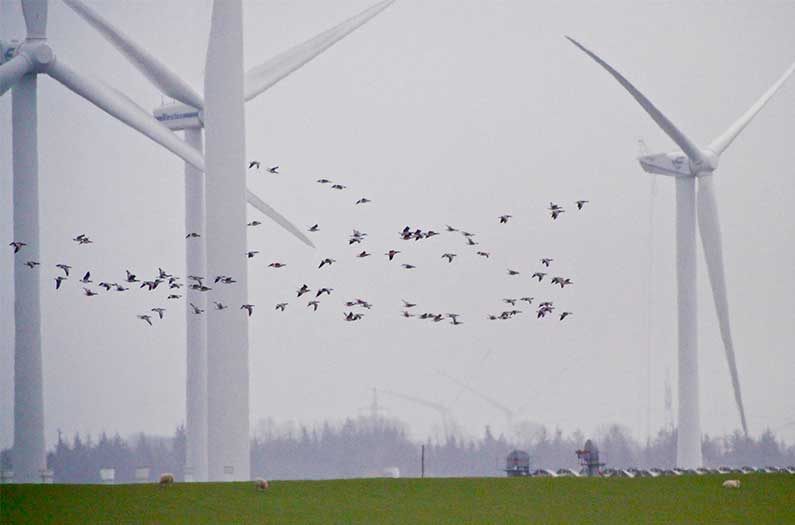 A simple paint job can save birds from wind turbines

A small study in Norway showed that painting one blade of a wind turbine black reduced bird mortality by over 70%.
By Cara Giaimo
September 2, 2020

Wind energy is one of the world’s most popular renewables. It’s also one of the most promising—some calculations suggest that strategically placed wind turbines could conceivably power the entire planet. As more turbines go up worldwide, they’ll help us reduce pollution, water use and carbon emissions, along with the environmental degradation, habitat loss and human health risks that come with fracking and oil extraction.

But there are some who don’t benefit quite as much: flying animals. Each year, turbine blades kill hundreds of thousands of birds and bats. As wind power becomes more prevalent, this number may rise into the millions—although it’s important to remember that other power generation methods likely kill far more birds than wind farms do.

This concern has led to a number of proposed interventions, from turning off wind farms during migrations to installing special whistles only bats can hear. A new study presents a relatively low-cost, set-it-and-forget-it option: just paint one of the turbine blades black.

For the study—which was based on previous laboratory experiments showing that kestrels could navigate effectively around turbines with one painted blade—researchers gave this treatment to some turbines on the Smøla archipelago in Norway. The area is rich in both wind and birds: the wind farm there produces enough power to run nearly 18,000 households, while eagles, gulls, and crossbills fill the archipelago’s lakes and marshes.

Researchers picked four pairs of adjacent turbines. One turbine in each pair was painted, while the other was left white. For three and a half years, they counted how many birds were killed by each turbine. They then compared these counts with the number of birds that had been killed by those same turbines in the years prior to the study.

Read:  Researchers calculated how many lives energy-efficient buildings could save

Some species of high concern also benefited greatly—after the study turbines were painted, the number of white tailed eagles killed by them went from six down zero.

Although this is promising news, there are some things left to be worked out. It’s not clear whether the method will help bats, which are also at great risk from turbines. It was not effective at all for willow ptarmigan, ground birds which tend to run into the turbines’ base rather than its blades. And since the study was done at a single site, it’s a good idea to repeat it elsewhere, to make sure birds in other places react similarly.

But a method like painting a single blade—something “practical and functional,” as the authors write, that doesn’t appreciably increase the cost or reduce the viability of wind farms overall—is exciting. If it is generalizable, it could be a way to make the skies a bit safer for those who were there first.