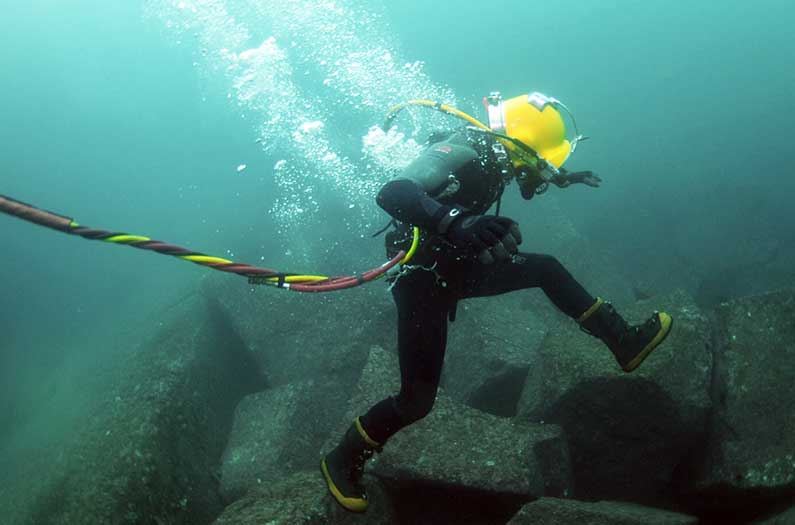 Humans’ construction footprint in the ocean quantified for the first time
Ocean sprawl covers more than 30,000 square kilometers of the sea floor—larger than the area of some coastal habitats, including mangroves and seagrass beds.
By Sarah DeWeerdt
September 8, 2020

Human infrastructure occupies more than 30,000 square kilometers of the sea floor, according to a new study. What’s more, factoring in the indirect effects of this development—alterations of water flow and chemistry, light and noise pollution, electric fields from underwater cables, and so on—expands our species’ underwater footprint a hundred-fold, to roughly 2 million square kilometers, or 0.5% of the global ocean.

Some of the data came from governments, international organizations, and corporate disclosures. The team also performed nearly 700 Google searches for more information, and combed through dozens of scientific articles for guidance on how to estimate the more distant effects of marine structures.

Marine construction began thousands of years ago with construction of seaports and coastal armoring, but ramped up starting in the mid-20th century. Today, “growth of coastal cities and sea level rise are driving a marine construction boom,” the researchers write in Nature Sustainability.

For now, most marine infrastructure hugs the world’s coastlines. Ninety-nine percent of undersea development (pretty much everything except underwater cables) has occurred within 200 nautical miles of shore, within countries’ exclusive economic zones (EEZs). The researchers calculated that marine construction affected about 1.5% of these EEZs in 2018, comparable to the proportion of global land given over to urban areas.

The global extent of marine development is also larger than that of some important coastal habitats, including mangrove forests and seagrass beds.

This development, especially of fossil and renewable energy infrastructure, is expected to expand into deeper waters in the future. There might also be new types of ocean development, such as deep-sea mining.

Aquaculture accounts for more than 70% of the area directly affected by marine development (40% of which is in Chinese waters), commercial ports 14%, and artificial reefs 11%. Nearly half of offshore oil rigs are located in the U.S. Gulf of Mexico, while renewable energy infrastructure is concentrated off the coast of the United Kingdom.

When it comes to indirect effects, commercial ports have by far the biggest footprint, accounting for more than 96% of the total are modified by marine development. This is largely due to the far reach of noise pollution from ports, which can cause difficulties for endangered species inhabiting nearby waters.

Big data gaps mean that the numbers in the study are likely to be conservative estimates, the researchers say.

They also compiled data on planned marine infrastructure projects. “Construction will continue to sprawl into the ocean for the foreseeable future,” they write, estimating that our direct underwater footprint will grow by nearly a quarter, to 39,400 square kilometers, by 2028. Alternative energy infrastructure such as wave, tidal, and wind farms is projected to increase especially rapidly.

“Construction may, in some instances, produce notable environmental benefits,” the researchers say. Offshore wind farms can protect areas of the sea floor from damaging trawl fisheries, and many underwater structures provide habitat for fish and invertebrates—especially if they are thoughtfully designed.

Still, just like on land, construction at sea destroys and fragments natural habitats and may introduce or provide stepping stones for non-native species. This development “can have unintended and sometimes hidden ecological and economic costs, as the natural habitats they replace or modify provide valuable ecosystem services that are not always explicitly documented or valued,” the researchers write. In other words, what’s out of sight underwater is all too often out of mind.