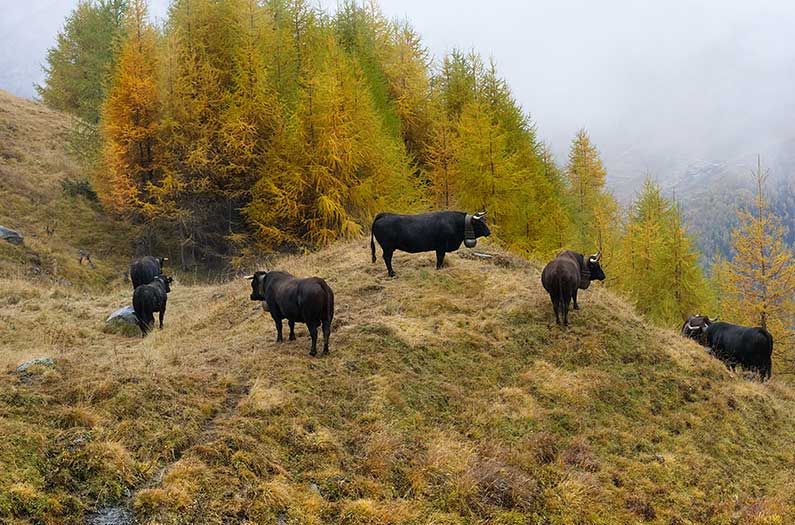 But it would require drastic dietary changes to free that land for rewilding.
By Emma Bryce
September 18, 2020

Worldwide, livestock tread on land that represents a major opportunity for our planet: by returning portions of this pastureland to the forests and grasslands that once grew there, we could sequester vast amounts of carbon, according to a new study.

This could get us substantially closer to the goal of limiting global warming to 1.5 °C above pre-industrial levels—but, such a dramatic transformation would only occur with dietary shifts across large parts of the planet.

Using extensive mapping techniques, the team of researchers on the new Nature Sustainability study pinpointed parts of the globe where vegetation had been cleared for pastureland or for crops grown as livestock feed. But crucially, they focused their attention on places where forests and grasslands would also be able to naturally reseed themselves. This allowed them to identify places with the highest rewilding potential, revealing an area of seven million square kilometers—about the size of Russia—spread across the planet, which would become available to sequester carbon once more.

To free up this land area, humanity would need to cut back significantly on meat. Reducing our consumption of farmed meat by 70%—in line with the dietary recommendations made by the EAT-Lancet Commission—would ultimately free up enough land to sequester 332 gigatons of carbon by 2050, through restored vegetation and soil. If humanity took a more drastic global step and switched to an entirely vegan diet, the sequestering potential of freed land would rise to 547 gigatons.

This rewilding would sequester an amount of carbon equivalent to the last 9 to 16 years of global carbon emissions respectively (with the higher number predictably occurring through humans completely swearing off meat.) Technically, this could buy countries a significant chunk of time to reach their climate targets.

Converted pastureland would account for the bulk of this imagined transformation—72%—while cropland for livestock feed would make up 28%. These latent carbon-slurping lands mainly occur in upper-middle income countries in parts of Latin America and East Asia, where the researchers found that restored pasture and cropland could capture the equivalent of the last 19 years-worth of carbon fossil fuel emissions from those regions. Some high-income countries, particularly in Western Europe, also showed considerable potential for forest and grassland regeneration, leading to sequestration that would total the last nine years of regional emissions.

This overlap between pastureland and reforesting potential in mainly upper-middle and high-income nations is also fortuitous, because reducing meat consumption in wealthier regions where there are more dietary options is less likely to impact food security. Reassuringly, the researchers also calculated that if we did completely cut meat out of the picture, the world’s remaining functional farmland could still produce more than enough food to satisfy humanity’s daily protein needs.

Yet, while turning the whole world vegan would have the largest rewilding impact, the researchers note that this ignores the reliance of many countries on meat and dairy as a primary protein source: meat and dairy can’t simply be erased from the global diet without severe nutritional impacts. Instead, the main take away from the study, they say, should be that there are specific places across our planet—hopeful hotspots—where the shift from pastureland to wilderness would have limited impacts on food security, but still deliver substantial changes for the planet. “With diet change, we have an opportunity to give large areas back to nature and wildlife with relatively minimal impacts on food security,” they say.

More than 80% of the world’s agricultural land is now devoted to rearing or feeding livestock. The alternative climate potential of this vast swathe of earth is tantalising to consider: even without going to extremes, the possibilities could be huge.

And compared to the many high-tech approaches that are increasingly take center-stage in discussions about climate mitigation, this low-tech concept—letting nature reclaim its former territory—feels like a solution that’s almost uniquely within our grasp.