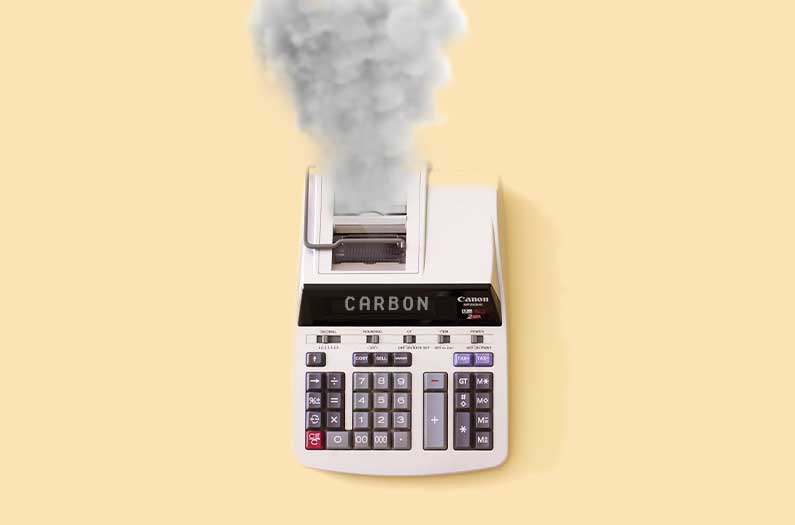 They argue the new methods are more in line with real-world concerns
By Sarah DeWeerdt
September 1, 2020

Conventional ways of looking at carbon emissions aren’t always the most illuminating—or the most useful in halting climate change, according to two recent papers.

Instead, researchers argue in a recent paper in Nature Climate Change, policymakers could choose a carbon price that would facilitate driving carbon emissions to zero by a certain deadline [1]. They call this a near-term to net zero approach.

The new approach still involves making choices, estimates, and assumptions. Policymakers first have to decide on a target date to achieve net-zero emissions. Then they have to select a pathway to the net-zero target: for example, a linear decline, or perhaps a peak and then decline model (as would be appropriate for many developing nations).

The next step is to use computer models to select a carbon price compatible with the chosen pathway over the next several years. “Focusing on the near term means that CO2 price estimates should not be unduly influenced by assumptions about the highly uncertain long-term evolution of technologies and behaviour,” the researchers write.

Finally, iterate: policymakers must periodically revisit and update the first three steps of the process as climate knowledge and decarbonization technologies advance.

The new method is also more in line with real-world concerns, the researchers argue. The social cost of carbon is basically organized around maximizing benefits to society. But this isn’t really what’s top of mind for policymakers—or members of the public, for that matter. Instead, these groups are most concerned about meeting promised emissions targets and limiting global temperature change. The near-term to net zero approach carbon is much more connected to those goals.

A second paper, published in the journal Energies, makes the case that it’s also time to revisit how we calculate climate liability—that is, who is responsible for carbon emissions [2]. Typically, emissions accounting looks at point-source pollution: how much greenhouse gas does a particular company or facility produce directly?

But in the new paper, researchers argue that instead we should be looking at bottlenecks: who controls the choke points without which emissions would not be possible? Such an analysis yields a very different picture of where to apply pressure to turn off the carbon spigot.

To demonstrate this, the researchers used publicly available data from the US government as well as company reports and disclosures to quantify the most carbon-intense facilities in the country. They calculated point-source emissions by tallying up the emissions that actually originate at a particular site. And they calculated bottleneck emissions by assuming that all of the fossil fuels that come through a facility are eventually burned.

The country’s highest-emitting coal mine by the bottleneck method, the North Antelope Rochelle Mine in Wyoming, is responsible for nearly 10 times the carbon emissions as the largest coal-fired power plant.

Point-source emissions from oil extraction are just 7% of total emissions as calculated by the bottleneck method, the researchers found. And the emissions enabled by natural gas pipelines are a whopping 35 times those emitted directly from this infrastructure.

“This major discrepancy in emissions diverts attention away from natural gas pipelines as responsible polluting entities, foregoing the opportunity to hold these actors accountable,” the researchers write. “The top three CO2 emissions bottlenecks (natural gas pipelines) do not rank at all on the list of top ten point-source emitters.”

The results suggest that efforts to stop the building of pipelines such as Keystone XL are warranted, even though these facilities are only responsible for minor point-source emissions. “The extensive capacity of the American pipeline system is particularly responsible for allowing the wide distribution of fossil-fuels, which consequently results in mass quantities of harmful CO2 emissions to be generated,” the researchers write.

And in turn, that suggests government policies or climate lawsuits that seek to hold major emitters responsible for the harms of greenhouse gases they produce should focus on these bottleneck facilities, they argue.