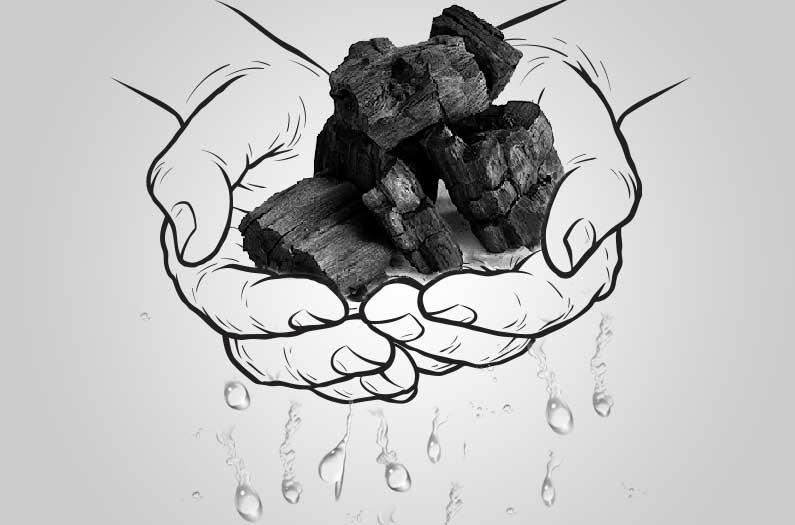 At high applications levels, researchers found that biochar can not only soak up a lot of carbon, but also reduce the need for irrigation by almost 40%.
By Emma Bryce
October 23, 2020

Biochar – the charcoal product used to enrich agricultural soil and trap carbon—may have a hidden commercial benefit for farmers: it could lock moisture in the soil and save on gallons of costly irrigation.

The coarse, black material, made by combusting wood, grass, and other organic materials under low-oxygen conditions, helps to sequester carbon in the soil. Biochar’s major benefit in this regard is that it doesn’t easily decompose, meaning it can become a reliable long-term carbon sink. Its application to farmland soils is recognized as one way to turn agriculture into a force for climate mitigation, helping it redress some of its immense emissions damage so far.

Biochar also reduces the need for fertilizer by enriching the soil, and gives soils the capacity to soak up excess water, which can cut the risk of runoff that strips vital topsoil off the land.

But while experts have been aware of these environmental benefits for some time, the researchers on the new BCG Bioenergy study say that not as much attention has been devoted to how these advantages could translate to benefits for farmers – especially considering that they’re the ones who need to be motivated to spread biochar on their land. That’s where their research comes in.

They examined several studies which explored how biochar increases the water-holding capacity in the soil: that’s a measure of how sponge-like soil is—or in other words, how much water it preserves for plants to slurp up, later on. This meta-analysis revealed that adding biochar to sandy soils, in particular, has notable benefits. They also showed that larger particles of biochar, instead of a finely-crushed medium, made soil more absorbent, partly because it makes the ground more porous and available for storing water.

When the researchers then followed up this analysis with a field trial on a small test plot of farmland, they were able to show that, at high applications in the soil, biochar can reduce the need for irrigation by a strikingly large amount: almost 40%.

Based on this discovery, the researchers identified regions across the United States where sandy farm soils infused with this product would result in large water savings. These are spread mainly across the north, north east, south east, and western parts of the United States—places where, in many cases, there’s a heightened threat of drought.

The researchers conclude that investing soil with biochar would enable farmers to cut back on irrigation that could save them huge amounts of money. “There’s a lot of biochar research that focuses mostly on its carbon benefits, but there’s fairly little on how it could help stakeholders on a more commercial level,” they say.

To remedy that, they also used their findings to develop a formula that farmers can use to calculate the precise water-saving potential of adding biochar to their land.

One caveat to the study is that farmers would need to apply biochar at much higher rates than is currently typical, to achieve similar savings. Though even at lower quantities on sandy soils, it would bring water-saving benefits. The researchers also note that despite the focus on sandy soils in their study, biochar could bring substantial benefits in other types of farmland too: most of the studies they examined just happened to focus on sandy soils.

Biochar may also have other, subtler benefits for farmers. Consistently dry soils can cause stress in plants that compromises their resilience to disease, and their productivity as well. So shoring up water reserves in the soil through biochar may be good for farmers’ bottom lines in other ways: it could help to create the conditions for healthier crops that require fewer costly pesticides, and which produce higher yields and generate more profit.

In any case, agriculture now accounts for 80% of the United States’ water consumption—a massive amount that will need remedying, under the threat of climate change and increasing drought. Farmers are going to need to use whatever sustainable resources they can to bring that consumption down. Biochar—which already brings many other environmental co-benefits—is at least one viable candidate to add to that toolbox.